GTA Wiki
Register
Don't have an account?
Sign In
Advertisement
in: Pages with unsourced statements, Features, Features in GTA V,
and 4 more
English

View source
watch 02:34
Fire Emblem Warriors: Three Hopes - The Loop
Do you like this video?
Play Sound
“Tennis is a very competitive sport that hasn't changed much since the 1800s. It is still an obsession of angry upper class swingers who like to sit in the stands, drink wine, and complain about diversity.”
— GTA V Website.

“Tennis is a great way to work off last night's bad decisions and dwell on just how middleclass you've become.”
— GTA V Manual

Tennis is unlocked after the mission Complications. It is an activity that can be done with dates or as a challenge against computer opponents with several different difficulty levels. Before starting, the player can select the numbers of sets you wish to play and the difficulty. There are several different shot types the player may use, such as lobs, topspins and backspins. You can also win money by winning a game of tennis. It is only available if playing as Michael or Trevor.

Unlike golf, tennis can be played at any time of day or night. The game clock will also be stopped.

The player is required to win a game of tennis in order to achieve 100% Completion in GTA V. 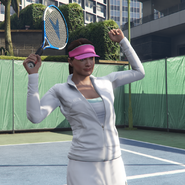 Amanda De Santa is available as an opponent either on the court behind her house or when playing tennis while spending time with her husband. 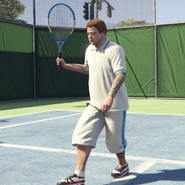 Jimmy De Santa - Jimmy is available as an opponent during friend activities when playing as Michael or Trevor. 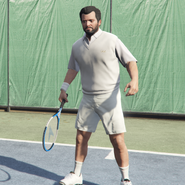 Michael De Santa - Michael is available as an opponent during friend activities when playing as Trevor. 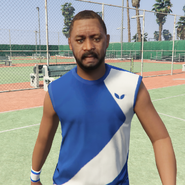 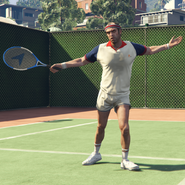 Trevor Phillips - Trevor is available as an opponent during friend activities when playing as Michael.

There are 8 Tennis court locations in Los Santos (Location Guide).

Pre-release video still of tennis with Michael and Jordan.

Rewards for winning a game (length of game does not change reward):