Standard White - 100%
“At some point, asking "So how fast it is?" is like asking the guy who just put his fist through your ribs "So how strong are you?" It's not about the speed anymore. It's not about the style, either, because one touch of the gas and it's little more than a blur. You just know that deep down there's an itch only this car can scratch, and you lack any of the personal qualities you'll need to resist.”
— Legendary Motorsport description.

The Pegassi Tempesta is a two-door supercar featured in Grand Theft Auto Online as part of the Import/Export update.

The car shows heavy influences from the Lamborghini Huracán, particularly in terms of scale and size, while taking side profiling from the 2016 Lamborghini Centenario, seen prominently in the side intakes and rear arches. The rear-top fascia of the vehicle takes design references from the 2014 Lotus Esprit concept, where the B-pillar, hood vents and grille and rear cockpit window are replicated. The front bumper, hood line and front headlights are also similar to that of the Esprit concept, while also taking design from the 2013 Lotus Elan concept.

The front of the car assumes a similar wedge-shaped profile from Pegassi cars like the Vacca and the Zentorno, featuring a trapezium-shaped central intake and two smaller, square-shaped ones next to it, bearing plastic details on the inner sections. The front area has parallelogram-shaped housings appearing to be finished in carbon-fibre, holding the dual headlamps and the turn signals below, while the front trunk bears the manufacturer emblem on the front and opens to reveal a luggage compartment.

On the sides, the car uses side marker lights around the front quarters and slightly flared fenders. The middle section feature plastic details on the skirting area and large mirror wings on the doors that are supported by carbon-fibre frames, while angular lines are seen passing through the doors and lead to a set of rear ducts, which are fitted with carbon-fibre separations and allow the air to flow to the engine bay and the rear brakes. The cabin area is relatively curved and features carbon-fibre details almost below the windows and on the rear quarters of the cabin, along with angular lines forming around the rear side ducts. The rear area of the car is predominated by the rear engine compartment, which is mostly finished in carbon fibre and features a single bent window and a set of small vents. Next to the rear compartment are long triangle-shaped vents, intended for exit of the airflow passing through the rear.

Similar to the Reaper, the rear overhang of the car is relatively short, featuring an inset area holding the rear lamp units, the single red strip on the centre and a thin vented section bearing the manufacturer emblem. The rear bumper is generally bulkier and features a larger vented section spanning most of the car's width, while the lower area is mostly occupied by the rear carbon-fibre diffuser, the wide, hexagon-shaped exhausts and the central license plate, along with meshed sections around the centre of the diffuser and open sections just below the exhausts.

The interior of the car is shared with the FMJ, having the same curved dashboard and the circular aircon units on the same parts as the FMJ. However, it features a set of paddle shifts behind the steering wheel. A Pegassi emblem can be also seen on the horn cap.

The primary colour of the car is applied on the body, while the secondary colour is applied on the bonnet, roof panel, the details around the lower areas and the interior stitching. It uses a set of rims consisting of arrow-shaped spokes, with their front halves painted and the rest of it in light grey. The painted sections correspond with the car's wheel colour, although those generated in Content Creator, seen in missions or purchased through Legendary Motorsport may have one.

The Tempesta is very similar to the Jester (Racecar) in that it has all-round excellent stats for the class and is a good car for novice drivers. The vehicle has immense acceleration, matched by an outstanding top speed and cornering capability, all thanks to the 30/70 all-wheel drive. This allows it to be taken to its limit effortlessly. The car performs excellently in comparison to other supercars, being very competitive with the likes of the RE-7B and X80 Proto.

The Tempesta is powered by a V8 engine with a model similar to cars like the Elegy RH8, coupled to a 6-speed gearbox in a mid-engine, all wheel drive layout, with a torque distribution of 30% to the front and 70% to the rear. Its engine sound appears to be a variation of the one on the T20, being a powerful, high-revving sound.

Seen in an official screenshot (on elevator, top right). 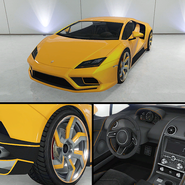 The Tempesta on Legendary Motorsport.

The Tempesta on the Rockstar Games Social Club.

The Tempesta on the updated Rockstar Games Social Club.

The Tempesta in the Cinematic preview on Rockstar Games Social Club.