Standard White - 100%
“Old-school pickup with a twist. Is that a turret in your loadbed or are you just happy to be San Andreas’ premier arms dealer? Weapon customization available in the MOC or the Avenger.”
— Career Builder description.

The Technical Custom is a modifiable variant of the Technical, sharing the same design and features. Some of the differences are the non-rusted body with rusted mirrors and side steps, wider fenders similar to the "Widearch kit" from the Rusty Rebel and its badge has been moved from its grille to the plate holder. It also adds a tow-hitch on the rear, able to tow another player's Anti-Aircraft Trailer. The vehicle can be also modified with an array of visual modifications, being armor plates, ram bars, liveries and respray colors.

Like the Rusty Rebel, the Technical and the Technical Aqua, the vehicle only has a single primary colour applied on the body. It also retains the same wheel design as the regular versions, being eight spoke rims with high-profile off-road tyres, with a rusty appearance on the rims.

Similar to the Technical and the Technical Aqua, the vehicle is equipped with the same machine gun turret that resembles a DShK 12.7mm (.50 caliber) machine gun, but can be replaced with a six-barreled 7.62mm Minigun resembling a GAU-17/A gatling gun.

The truck shares a similar performance with the Technicals and the regular versions, being a nimble and fast vehicle with good traction for off-road environments. However, due to the increased mass, it is slower than the regular versions for most situations, although this also means better grip, traction and stability. Performance upgrades can slightly improve the vehicle's statistics.

The truck is powered by the same V8 engine as its regular counterparts, and retains the same 5-speed gearbox and AWD layout (with a 30% front, 70% rear torque distribution). It shares the same diesel sound from the Technical, the Technical Aqua, the Rancher XL and the Cavalcade.

Being an improvised combat vehicle and unlike the Insurgent Pick-Up and its Custom variant, the Technical Custom does not have any sort of defensive capabilities against both targets on foot and combat vehicles, especially tanks and helicopters. The front occupants may get shot through the windshield and the gunner may fall of if the vehicle rolls over, either suffering a considerable damage or dying from being crushed by the same vehicle. The lack of armor also makes it vulnerable to explosives in general.

The Technical Custom can be equipped with additional Armor Plating that will primarily affect the windows. Adding any Armor Plating will take away the ability for occupants to use throwable weapons, and none of the upgrades render the glass bulletproof.

Similar to the Technical and its amphibious variant, the vehicle has access to a turret that provides a 360-degree coverage and an elevation range of between -35 and 45 degrees, providing impeccable defense against helicopters, pursuing cars, and targets at almost below the truck when in elevated areas. However, the gunner is almost completely exposed, as it has no defensive parts. Also, because of the limited accesibility and space within the vehicle, the gunner is forced to stay in the turret, and killing them renders the vehicle defenseless against larger threats. 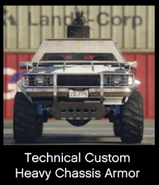 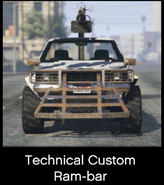 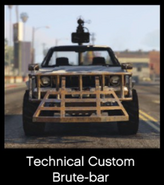 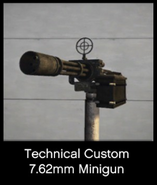 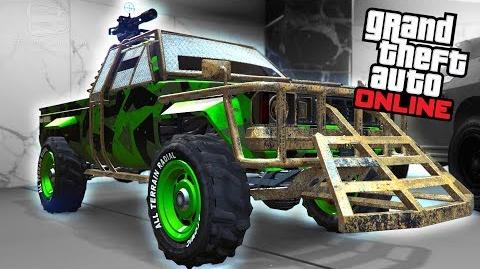 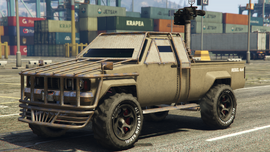 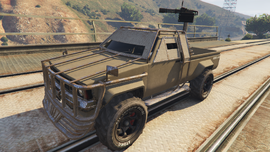