Standard White - 100%
“They don't make you choose between red, white and blue, so why should you compromise when it comes to your pickup? Classic redneck open-top? Check. Rudimentary motorboat? Check. Wide-angle machine gun post? Check. Sometimes demanding everything is the only patriotic thing to do.”
— Warstock Cache & Carry description.

The Karin Technical Aqua is an amphibious armed pickup truck, featured in Grand Theft Auto Online as part of the Import/Export update.

The Technical Aqua is an amphibious variant of the Technical, which is also a variant of the Rusty Rebel. The overall appearance seems to emulate the "Toybota", a fourth generation Toyota Hilux amphi-car built by Jeremy Clarkson that is used to cross the Rudyard Resevoir on Top Gear. The drums on the side also gives the Technical Aqua a resemblance to the "Nissank", a Nissan D21 amphi-car also built by Clarkson, which he used to cross the English Channel.

The truck retains the same design and features as the aforementioned vehicles, but adds two barrel floats attached to the bed of the truck and a motorized boat engine on the rear, which steers in conjunction with the car's steering system and the propeller is coupled to the engine drive systems (visible when the truck is on water). Its front end features a combination of the two bull bar sets from the standard Rebels, except that the rally lamps are replaced by a winch.

Like the Rusty Rebel and the Technical, the Technical Aqua is painted with a single primary colour on the bodywork, which can be resprayed through any mod shop. It also uses eight spoke rims with high-profile off-road tyres, with a rusty appearance on the rims.

Like the Technical, the vehicle is equipped with a machine gun turret resembling a DShK 12.7mm (.50 caliber) machine gun, with the same sight resembling the anti-aircraft optical sight used on the real-life weapon.

The truck shares a similar performance with the Technical and the regular versions, being a nimble and fast vehicle with good traction for off-road environments. However, due to the increased mass, it is slower than the regular versions for most situations, although this also means better grip, traction and stability. The vehicle can also travel in water thanks to the modifications, although its performance is severely reduced as with most amphibious vehicles, with decreased speed and certain difficulty to turn and reverse, especially on stormy waters.

The truck is powered by the same V8 engine as its regular counterparts, and retains the same 5-speed gearbox and AWD layout (with a 30% front, 70% rear torque distribution). It shares the same diesel sound from the Technical, the Rancher XL and the Cavalcade.

Being an improvised combat vehicle and unlike the Insurgent Pick-Up, the Technical Aqua does not have any sort of defensive capabilities against both targets on foot and combat vehicles, especially tanks and helicopters. The front occupants may get shot through the windshield and the gunner may fall of if the vehicle rolls over, either suffering a considerable damage or dying from being crushed by the same vehicle. The lack of armor also makes it vulnerable to explosives in general.

Machine Gun: Like the Technical, the Technical Aqua comes equipped with a 50. caliber machine gun turret, which has devastating power against pedestrians and unarmored vehicles. As it uses the same round as the Insurgent Pick-Up's gun, the Technical Aqua is able to kill most NPCs and players in one to two hits and take down most vehicles in less than twenty. Because of this, and paired with its excellent rotation angle of 360 degrees and elevation angle of between -35 and 45 degrees, the turret provides impeccable defense against helicopters, pursuing cars, and targets at almost below the truck when in elevated areas.

However, as a compromise for its power, the gunner is almost completely exposed, as it has no defensive parts. Also, because of the limited accesibility and space within the vehicle, the gunner is forced to stay in the turret, and killing them renders the vehicle defenseless against larger threats. The front occupants are still able to use drive-by weapons, though. 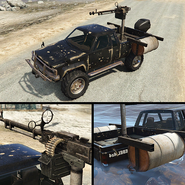 The Technical Aqua on the updated Rockstar Games Social Club.

The Technical Aqua in the cinematic preview on Rockstar Games Social Club.

Technical Aqua on the water.