Standard White - 100%
“Just when you thought pickup trucks couldn't get anymore hillbilly, someone put a big ol' gun on the back of one. Celebrate your right to bear arms and your right to guzzle gas at exactly the same time.”
— Warstock Cache & Carry description.

The Karin Technical is an armed 2-door pickup truck featured in Grand Theft Auto Online as part of the Heists Update.

The Technical is basically an armed variant of the Rusty Rebel, sharing the same design with both the Rebel and the rusty version. However, it features a unique combination of bull bar and sump guard extras derived from the aforementioned vehicles (although the bull bar is more adjusted to the truck's width), as well as a steel platform on the loading bed with a dedicated mounting of the rear turret, which can be accessed by anyone.

The vehicle is normally set to spawn in a white primary colour applied on the entire bodywork, except for the examples seen in the Series A Funding heist finale, which can come in several colours. It also retains the same wheel design as the regular versions, being eight spoke rims with high-profile off-road tyres, with a rusty appearance on the rims.

The truck shares a similar performance with the regular Rebel and the rusty variant, being a nimble and fast vehicle with good traction for off-road environments. However, due to the increased mass, it is slower than the regular versions for most situations, although this also means better grip, traction and stability.

The truck is powered by the same V8 engine as its regular counterparts, and retains the same 5-speed gearbox and AWD layout (with a 30% front, 70% rear torque distribution). It shares the same diesel sound from the clean Rebel, the Rancher XL and the Cavalcade.

Being an improvised combat vehicle and unlike the Insurgent Pick-Up, the Technical does not have any sort of defensive capabilities against both targets on foot and combat vehicles, especially tanks and helicopters. The front occupants may get shot through the windshield and the gunner may fall of if the vehicle rolls over, either suffering a considerable damage or dying from being crushed by the same vehicle. The lack of armor also makes it vulnerable to explosives in general.

As of the Ill-Gotten Gains Part 1 update, the Technical has bulletproof tyres by default, like the Armoured Kuruma and Insurgent, making it much more viable than previously.

Machine Gun: The Technical comes equipped with a 50. caliber machine gun turret, which has devastating power against pedestrians and unarmored vehicles. As it uses the same round as the Insurgent Pick-Up's gun, the Technical is able to kill most NPCs and players in one to two hits and take down most vehicles in less than twenty. Because of this, and paired with its excellent rotation angle of 360 degrees and elevation angle of between -35 and 45 degrees, the turret provides impeccable defense against helicopters, pursuing cars, and targets at almost below the truck when in elevated areas.

However, as a compromise for its power, the gunner is almost completely exposed, as it has no defensive parts. Also, because of the limited accesibility and space within the vehicle, the gunner is forced to stay in the turret, and killing them renders the vehicle defenseless against larger threats. The front occupants are still able to use drive-by weapons, though.

The vehicle itself cannot be modified at any mod shop, as it is a Pegasus vehicle. However, one can bring it to a workshop inside a Mobile Operations Center or Avenger to convert it into a custom variant and a personal vehicle.

Promotional screenshot of the Technical, with a gunner using the turret.

Close view of the Technical's gun.

Detailed view of the gun.

First person view of the turret. 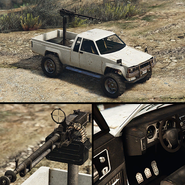 The Technical on Warstock Cache & Carry.

The Technical on the updated Rockstar Games Social Club.

The Technical in the cinematic preview on Rockstar Games Social Club. 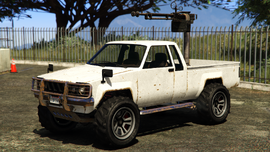 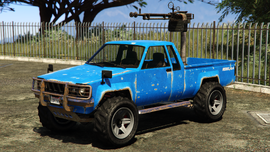 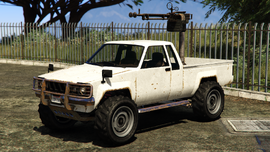