Wikipedia has an article on:
Tear Gas
Wikipedia

In real life, tear gas is generally considered to be a non-lethal weapon, but in the world of Grand Theft Auto, it is anything but. Granted, it does take prolonged exposure to the gas to kill, but in confined spaces, this can be arranged. However, seeing as the gas causes people to stop what they are doing while they cover their face and cough, the most practical use for this weapon is to slow enemies down while the player is trying to escape or switch to another weapon and shoot them easily.

The Tear Gas makes a return in Grand Theft Auto V, this time taking the form of a M18 Smoke grenade, specifically the "Smoke Red" canister.

The weapon is now fully interactive and can be used freely in all versions of the game. NOOSE officers that pursue the player in a wanted level of 4 or 5 will use these if necessary, throwing a Tear Gas canister at the player in an attempt to make them leave their cover.

In Grand Theft Auto: San Andreas, Tear Gas can be used to attack pedestrians, while the player is unaffected and can freely walk around the gas, until the smoke subsides. Throwing a single can will last approximately 30 seconds, and by dropping more cans, the smoke will last longer and any pedestrians or cops who enter the smoke will choke on the toxic gas until they die. However, using Tear Gas in a very populated area such as Ocean Beach or The Strip will give the player a high wanted level rather quickly and if Tear Gas cans are used in succession, it may possibly award the player a six star wanted level. Enemy gang members will also turn hostile if the player uses the tear gas on their territory.

The Tear Gas retains most of its properties from previous iterations, but the area of effect of the weapon has been decreased. If any NPC is caught in the gas, they will fall to the ground and will asphyxiate until dying, rendering them unable to react. Enemies will also try to avoid the gas once it is released. Players caught in the area of effect will still be able to move, but will take damage until getting killed or when the gas disperses. 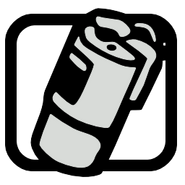 Holding a Tear Gas can in first person in Grand Theft Auto V.
Add a photo to this gallery

There is a glitch in Grand Theft Auto: San Andreas involving the Tear Gas. After the Tear Gas is thrown into a crowd, the player can perform a stealth kill on anyone. Everyone affected by the gas will undergo the same animation and die at the same time. However there is a rare glitch that if the player performs this within the smoke cloud, they will also die as if someone did the stealth kill on them.

Retrieved from "https://gta.fandom.com/wiki/Tear_Gas?oldid=1195045"
Community content is available under CC-BY-SA unless otherwise noted.