View source
watch 02:52
Roblox: DeepWoken - The Loop
Do you like this video?
Play Sound
For the achievement/trophy in Grand Theft Auto: Vice City - The Definitive Edition, see Target Practice (Achievement).

In-game time
“I'll introduce you to one of my all-time favorite pastimes. You're gonna love this.”

Target Practice is a Strangers and Freaks mission located in Sandy Shores, between Niland and Armadillo Avenues. In this mission, Trevor target-shoots all around town with local rural-American fixture, Cletus Ewing.

Trevor meets Cletus in front of his dilapidated blue house on Marina Drive, between Niland and Armadillo Avenues. Cletus arms Trevor with a sniper rifle and takes him up to his second-floor terrace. There, Cletus has Trevor shoot three satellite dishes.

Cletus and Trevor drive to the large, run-down motel in the west of town. Cletus takes Trevor to a second floor balcony. From there, Trevor must use the sniper rifle to shoot out three tires on vehicles moving along the nearby highway.

Cletus takes Trevor to the roof of the same motel. From there, Trevor must shoot three coyotes. When Trevor has shot the coyotes, Cletus tells Trevor he will text him an invite to join him in Paleto Bay, where he'll show him how to hunt Elk. Trevor agrees to go hunting with Cletus. 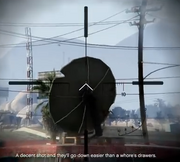 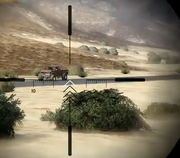 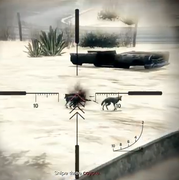