Target Assault or Target Assault Races are a class of races added in Grand Theft Auto Online as part of the Southern San Andreas Super Sport Series update and released on April 3, 2018, during the Target Assault Week event.

"In Target Assault Races, now available to play in GTA Online, teams of two strap into a range of weaponized vehicles - one behind the wheel, and the other on the trigger.

The Gunner is responsible for destroying targets from a mounted gun, while the Driver races to outmanoeuvre the opposition for additional points on each lap. After each lap the Gunner and the Driver switch roles, and whichever team finishes with the most points wins.

Finishing laps in the top three and passing through Checkpoints ahead of your opponents will earn you bonus points, but accuracy is the name of the game here. You'll score more points for smaller targets, and even more for hitting them dead center. Scatter-shooters may feast on large green targets, but if you're racking up bullseyes on the elusive small red target, you'll soon eclipse them on the leaderboard.

As the Driver, play to your teammate's strengths — if your Gunner's on a streak, ease up on the throttle and let them rip through a few more targets before rushing to the next Checkpoint."
―Rockstar Newswire description.

There are 7 Target Assault Races. These are listed in a separate list from Stunt Races. They are named in the same manner as Adversary Modes.

Each Target Assault race is locked to a different weaponized vehicle: 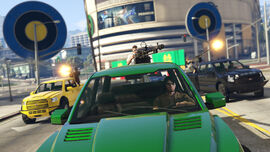 Caracaras on Target Assault I. 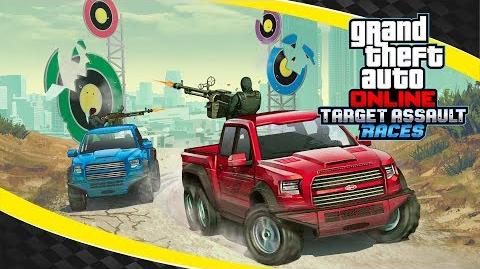 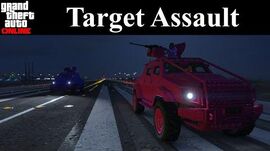 Retrieved from "https://gta.fandom.com/wiki/Target_Assault?oldid=1275320"
Community content is available under CC-BY-SA unless otherwise noted.