GTA Wiki
Register
Don't have an account?
Sign In
Advertisement
in: Articles with section stubs, Vehicles, Vehicles in GTA 1,
and 7 more
English

The Tanker in Grand Theft Auto bears a resemblance to a Bedford S-Type tanker. It is designed as a foir-axle straight truck with a cab-over design and a tanker load, as well as a twin-steer mechanism. It has a painted cab and what look like warning signs on either side of the tanker.

The Tanker in Grand Theft Auto: London 1969 is designed as a generic British lorry of the 1960s. It bears a logo that resembles the badge of British Petroleum.

In Grand Theft Auto: San Andreas, the Tanker appears with a semi-cab design, loosely based on a Mack R series, with elements from the Ford L9000 and the International Paystar incorporated into it.

The front of the truck is distinguished by its large heavy-duty front bumper consisting of dual horizontal bars and six vertical frames between, as well as a silver finish on the end of the hood/nose and part of the front fenders. The same hood/nose houses a square grille with six horizontal elements and a small compartment on the upper area, while the front fenders house square headlights on the front and small turn signals on top. An air cleaner can be seen on the passenger side, while a split windshield with wipers can be seen on the front of the cab.

On the sides, the bottom area features large access steps and large fuel tanks, while the cab features small mirrors on the doors, a single trumpet horn on the roof, long exhaust stacks and the extended driver's cab quarter, with various compartments and what looks like protective panels on the rear quarters, presumably to protect the cab from the trailer when turning too sharp.

The rear section mostly consists of the main chassis with a set of trailer cables above, the circular tail light units and the small mudflaps with warning stickers above. While its name suggests that it is intended to attach a tanker trailer, the player can attach any of the large trailers available in the game.

The truck spawns in a variety of primary colors applied to the body.

Like the GTA San Andreas rendition, the Tanker in Grand Theft Auto: Chinatown Wars is designed as a conventional cab semi-trailer truck, but it is only available with a permanently attached tanker trailer.

Surprisingly, the Tanker in the first Grand Theft Auto has the highest top speed - if driven on a straight road for long enough, it will keep picking up momentum – much like the Bus and Coach.

The Tanker is also one of the most durable vehicles in the game, being able to withstand a lot of damage. Despite it being a large truck, the Tank is able to drive over it.

The Tanker is powered by a large diesel engine, which is coupled to a 5-speed gearbox and powers the rear wheels. It uses a loud diesel engine sound shared with the Linerunner and the Roadtrain.

In Grand Theft Auto: Chinatown Wars, the Tanker's lengthy size and large weight make the vehicle less than suitable for intensive driving, faring poorly in top speed and acceleration, as well as having a poor cornering ability (often requiring a large turning radius) and braking. If the trailer is set on fire, it will blow up dramatically, usually killing the player and harming anyone else near the vehicle. Also, during the mission Trail Blazer, the Tanker is shot at whilst the player is driving and starts to leak fuel; this fuel starts to set on fire behind the player and, if they do not pick up enough speed, the flames will reach the trailer and the truck will explode. This can be re-enacted outside of the mission as well.

A variation of the Tanker in GTA 1, available only during Tequila Slammer - Phone 4: Mission 1. 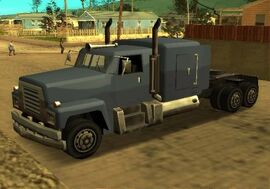 PlayStation 2 version of the Tanker, with dual rear wheels. 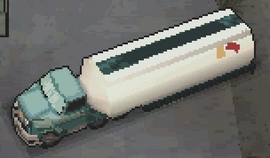 The Tanker in the Nintendo DS version of Grand Theft Auto: Chinatown Wars.