Yasha Jackson
“I love you and Lamar, we grew up together but this life ain't for me, and you knew that, you ain't changing.”
— Tanisha to Franklin Clinton about Lamar Davis in the mission Lamar Down.

Tanisha grew up in South Los Santos together with Franklin and Lamar. She also attended the same high school as them, as mentioned in the mission Chop.

Because of Franklin's gang lifestyle and because of the recent death of her brother, who was involved in gangs, Franklin and Tanisha separated prior to the events of Grand Theft Auto V. Over the course of the story, Franklin converses with Tanisha via email and phone calls, attempting to win her back, but she rebuffs him each time. At one point early in the game, she also stops by his house to explain her need for a more stable man in her life, and through that, start a family. In the mission Lamar Down, she arrives at Franklin's new house to inform him of her imminent marriage to a doctor named Jayden (in the mission Franklin and Lamar, Lamar brings up the fact that he's a brain surgeon). She also reveals to Franklin that Stretch has set Lamar up to be killed by the Ballas and asks Franklin to save him. At the end of the storyline, regardless of which ending the player chooses, Tanisha calls Franklin to inform him about her wedding the following day. Franklin accepts this and wishes Tanisha the best.

While Tanisha doesn't physically appear in GTA Online, a red Pfister Astron with the license plate "TAN1SHA" can be found parked in Franklin's driveway. Additionally, a wooden plaque with "The Clintons" engraved on it has been installed on the front of Franklin's house, and children's toys and a plastic slide can be found in his backyard, suggesting her marriage to Jayden ended, and she got re-married to Franklin, and had children between 2013 and 2021. The Agency Security Guard calls her "Mrs. Clinton" in random idle dialogue in the F. Clinton and Partner Agency.

In Security Contract: Vagos Captains, Franklin mentions their children go to the same school as the ones of the CEO of Go Loco Railroad, indicating that at most, they are school-aged, and suggests they attend a school that befits their parents' social status.

In Security Contract: Triad Lieutenants, Franklin relates how Tanisha recently met the wife of a major importer at a party. Her husband's business was being severely undercut by the Los Santos Triads, to which Tanisha apparently explained that F. Clinton and Partner could resolve the situation. The importer's wife then passed on her contract request through Tanisha to Franklin.

As seen in Lamar Down, Tanisha is hypocritical, as she criticizes Franklin willing to give up his old life and friends in pursuit of a luxurious life (the reason why they broke up in the first place) when she has done exactly the same, even marrying a rich doctor. She even comments about how happy she is with her new life on his Lifeinvader page. Unlike Franklin however, she sought a legitimate way of life instead of resorting to criminal means. Continuing to show her hypocrisy, she berates Franklin for his recklessness and for acting crazy, despite previously asking him to go save Lamar, which required Franklin to charge into a saw mill and kill several people; something that Tanisha would likely consider to be reckless and crazy. 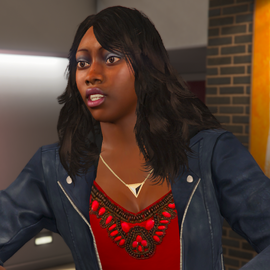