Standard White - 100%
“The kind of muscle car that rises out the apocalypse in style. Just point it straight at the mushroom cloud, slam the gas, and let some of the worst fuel efficiency stats of all time do the rest.”
— Career Builder description.
“Winner of multiple industry awards including 'Most Powerful in Class', 'Worst Handling' and 'Biggest Fireball', the Declasse Tampa brings the effortless cool of the 60s to a generation born decades too late. Time to gun the engine, stare directly into a moody sunset and live forever under a roadside grave in the middle of nowhere.”
— Southern San Andreas Super Autos description.

The Tampa is a two-door muscle car featured in Grand Theft Auto: San Andreas, The Ballad of Gay Tony, and Grand Theft Auto Online as part of the Festive Surprise 2015 update. It is manufactured by Declasse in the HD Universe.

The Tampa in Grand Theft Auto: San Andreas resembles a 1965-1969 Chevrolet Corvair Monza, except it is not rear-engined and it has a grill. It has plain steel wheels, and mismatched paint on multiple body panels, indicating it was put together with spare parts from a junkyard, making it one of the first "Beater" cars in the GTA series. These panels cannot be resprayed into a single color at Pay and Sprays, but can be done at TransFenders. However, the vehicle will retain its crooked licence plates if it is modified. The vehicle also appears to be over-scaled and in comparison to some under-scaled cars, as it looks much larger than an old compact.

The car spawns in a variety of primary body colors, with the mismatched parts actually being its secondary color. The Tampa is one of the gang cars used by the Da Nang Boys, a gang based in San Fierro.

In both The Lost and Damned and The Ballad of Gay Tony, the Declasse Tampa is redesigned as a far more beefy muscle car that may butt heads with the Sabre GT. Parts of the exterior of Tampa is based on the 1964-1973 Ford Mustang, while the front of the Tampa resembles a 1970-1972 Dodge Dart Demon; the roof and sides of the car are reminiscent of the 68-72 Chevrolet Nova (but with less of a fastback profile); the rear is reminiscent of a 1968 Dodge Charger. The paint job is based on that of a 1969 Ford Mustang Boss 302, with the stripe going across the trunk based on the super bee stripe, found on performance cars from Dodge and Plymouth since the 1960s.

The Tampa in TLAD only appears in the opening cutscene in front of the Pay 'n' Spray and is also featured in the BradyGames Strategy Guide for the episode. However, an email sent by Rockstar indicated that the car was not actually drivable in the game. the car is also not programmed to appear on streets, even if the player drives it. The Tampa later reappears in TBoGT as a fully functional car and is a common sight early in the game. While still lacking a manufacturer's badge, the car is implied through police chatter to be a Bravado model, although it is actually a Declasse model.

In Grand Theft Auto Online, the Tampa returns as part of the Festive Surprise 2015 update and it was released on Wednesday, December 23, 2015. Note that this car was depicted in the first day of the update (seen in a screenshot), yet the car was released 2 days later.

The car retains its design as in EFLC, except by some minor details on the interior and the lack of the ram-air hood (although it is available at Los Santos Customs as a hood modification, however).

Color distribution is the same, where the primary one is applied on the body (as well as the interior stitching), and the secondary one in the form of the aforementioned stripes (except for the twin stripes on the hood, which are part of the aforementioned hood modification). Its stock wheels have an updated rim design, being similar to the "Revolver" muscle rims that are also available at Los Santos Customs.

The Tampa's performance is, at best, below average, with sluggish acceleration and mediocre top speed, as well as heavy steering and unstable cornering, like that of a Clover and a Sabre.

The Tampa's performance, which is identical in both TLAD and TBoGT, is considerably good in terms of raw power. The car's acceleration is excellent and the car can reach a considerably high top speed. This is because the car features a 310 cui (5.1L) V8 which produces a lot of torque at low RPM which allows burnouts to be performed easily, the combination of the large size of the engine and the softness of the suspension means that cornering is rather unpredictable, however, as the car can spin out in sharper turns or burn out, if the player applies gas to the car, as the car generates excess torque. Braking is considerably impressive considering the car's weight, providing the car with shorter stopping distances.

The vehicle is powered by a 310 cubic inches (5.1 liter) V8, positioned in a front-engine, rear wheel drive configuration and coupled to a 5-speed gearbox. The engine also has a mounted cylindrical air filter by default. Being a muscle car, its engine sound is similar to that of a Sabre GT or Dukes.

The car's V8 engine is fairly powerful, providing enough torque to make the wheels spin on takeoff and to give it decent top speed and acceleration. The handling is relatively stable for a muscle car, helped by the very good suspension. The frame is very heavy and rather durable, but the front and rear fascias show a bit less crash durability than one would expect and the car is also not particularly resistant to gunfire. The brakes are not very good, meaning the car requires brake discipline to corner properly. The car overall feels like the Sabre Turbo with a bit less power in exchange for better cornering.

The vehicle retains its handling line from EFLC, albeit the gearbox is now only 4-speed (despite the website claimed to be 5-speed). The vehicle also retains its engine model. In place of a turbocharger, the Tampa features a supercharged sound effect, which is amplified when a turbocharger is equipped.

A Tampa featured in the Lost and Damned's opening cutscene.

Screenshot for the Festive Surprise 2015, showing a Tampa in the background.

Official screenshot of the Tampa.

The Tampa on the updated Rockstar Games Social Club.

The Tampa in the cinematic preview on Rockstar Games Social Club. 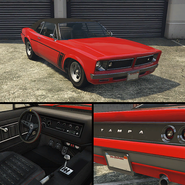