There is no wreck version of the esperanto. the only ones are the vigero, sabre and emperor. Hbriz 22:07, 6 February 2009 (UTC)

I don't entirely agree with the deletion. It does require alot of cleanup, but this could be a useful article (not useful like a mission article, but we have articles less important than this)! Thoughts? Biggest GTA Fan EverTalk 07:07, 16 February 2009 (UTC)

I can see your point, but, like I said, the 'beater' variations of the Vigero, Sabre, and Emperor are already mentioned (and pictured) in their respective articles. However, maybe this page could be used to list/feature the burnt-out wrecks that appear throughout the series? For example the Idaho which appeared in the beta version of GTA III only appeared as a burnt out wreck in the final version of the game (as well as every other game in the GTA III era). I also remember seeing several burnt out versions of actual in-game vehicles in GTA IV, for example, the Blista Compact and the Voodoo - which have the same properties as a brick wall. Of course, that information can just be listed on each of the vehicles articles aswell... - Hardrock182 23:40, 27 February 2009 (UTC)

Seems like a good idea to me, I suppose the category could just be called something like 'Wrecks' or 'Jumk Cars'. To be honest, I see no problems with the category being used universally to refer to 'beaters' and burnt-out wrecks, as there are no burnt-out versions of the Vigero, Sabre, or Emperor in GTA IV (but their 'beater' counterparts could still be referred to as 'Wrecks' or 'Junk Cars'). Furthermore the Tampa and Clover from GTA San Andreas would fall into that category. - Hardrock182 00:14, 28 February 2009 (UTC)

I have turned the page into a disambig. What do you think of the format? Any other ideas of what this page should be used for? Biggest GTA Fan EverTalk 04:54, 9 March 2009 (UTC)

Wait a minute. The use of beaters can be traced all the way back to GTA:SA, when they had cars with mismatched panels (e.g. the Tampa and Clover), as well as the beater "Ghost" Glendales in the woods. There could be something salvageable about this article. - ZS 16:54, 9 March 2009 (UTC)

Is the Regina a beater?

It does behave like a beater (junky engine noise and backfiring, just to name some), but it only has a faded body color to show in appearance (on the level of the Tampa and Clover in GTASA). I'll leave it to your guys to decide. - ZS 20:40, May 13, 2010 (UTC)
I can't find the Elegant wrecks on GTA4. Anyone care to post pictures?

Its the most common wreck in the game.

"It's the most common wreck in the game", eh?

Could someone post a screenshot of the shipwreck that's of the coast of North Point Mall in Vice City? I know it's there but I can't take a decent screenshot on the PS2 version. I'm not referring to the Reefer. I mean a legit ship. --RadicalEdward2 15:24, February 7, 2012 (UTC)

we need an image for the panzer II that is located underwater.Swedishfalloutpootis (talk) 17:46, March 6, 2014 (UTC)

I can confirm that there are multiple Panzer 2's instead of just one, and the trucks seen are Barracks Semis. There is also a single Barracks in the same vicinity. There are several trailers and trailer skeletons, and that is all that is found near humane labs that I could see. I have also found a, before unmentioned, wreck of a Duster underwater while searching for submarine parts. It is located somewhere north of the lighthouse, I cannot remember exactly where. - Gelertjar (talk) 20:40, April 8, 2014 (UTC) 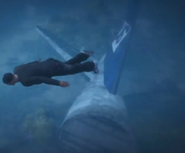 ...The Cargo Plane wreck is at least the same as this one.
Add a photo to this gallery

Check the Alamo Sea, where the plane crashed in Minor Tubulence and see the differences. Thanks.Camilo Flores (talk) 03:03, October 9, 2014 (UTC)

I agree with you Camilo.

Hello everyone, I suggested to separete Wrecks and Beaters, i'm about to create a page only for driveable beater cars, and this page will only have wrecked undriveable vehicles, so this page will be in the category "Uncontrollable vehicles", while the "Beaters" page not, do you agree?

I've looking for the wrecks of the Barracks in the Humane Labs location and I found a what appear to be a different tank. Of course, a wreck of a Rhino is near here, but there's another tank with machine guns, probably an anti-air tank. Is someone checked it? Thanks.

I saw this too, the Tank looks different from the Rhino and the T-34 and the Barracks is very large, i'll see if I can take a pic of this Barracks wreck.

Major shake-up of the page and table lists.

I am mid-way through mapping and cataloguing the sunken wrecks in GTA IV and GTA V. Any vehicle type that is wrecked in the water needs to be listed under the maritime wrecks table. The tanks and other military hardware off Humane Labs appear to be the cargo of a larger wreck, rather than isolated dumped hardware. At the moment, I have kept them listed as individual entries until such time as I have completed my sub-marine survey of the area.  smurfy (coms) 10:49, January 26, 2015 (UTC)

Yoy did a very good job and by the way the shipwreck in the los santos harbor has a turret from a tank among the wreckage, perhaps you could get a photo of it.. Swedishfalloutpootis (talk) 22:42, February 27, 2015 (UTC)