Has this one just vanished? I haven't had it in absolutely ages, ever since Doomsday Heist update. I've had every single other variation at least thrice, and this one just hasn't occurred. I'm really hoping it has been abolished, it was by far the worst one. I'll say this now, and then tomorrow I'll get it out of bad luck. Monk Talk 22:46, February 15, 2018 (UTC)

Haven't had it recently either, I know because I want to try using my Stromberg at the start, then call in my own 'bob.  Smurfy: illuminate - communicate - spectate 22:51, February 15, 2018 (UTC)

That'd be an interesting technique. Although you've filled me with hope knowing R* did the right thing with this one. Still sucks that the AI on the Little Seoul ones are fucking pathetic. Other than that, I'm fine with the rest :p Monk Talk 22:55, February 15, 2018 (UTC)

Chatter on forums reminded me, there was a bug - vehicle spawned under the barge (under water) and was destroyed as soon as you exit office... (I experienced that once) and they've obviously disabled it until they can fix it. Smurfy: illuminate - communicate - spectate 23:36, February 15, 2018 (UTC)

After about a year, I've FINALLY found the file data for all the modifications every last vehicle uses in all the steal missions, from those shitty Futos, to all the lowriders and pimped cars at car meets. Finally can start making something out of em. It confirms one of my long-term suspicions - all these NPC cars have very specific license plates. Today I grabbed screenshots of a few cars at the car meet situation and searched the license plate number in the file I found today, and found the car, along with all the data for the colours and modifications.

I haven't played this week but was still getting Del Perro photoshoots regularly before that. Smurfy: illuminate - communicate - spectate 21:48, March 9, 2018 (UTC)

Apparently either a Bright Blue or Lime Green Futo can chase you after the mission, alongside the Dominators. Can anyone confirm the Lime Green Futo? I have only ever seen the blue ones. The model set looks like this:

Yet another custom car that I haven't seen spawn. This time it's a Matte Yellow and Black Dominator. Here's the model set. Any info?

Pretty sure they are seen as chase cars for the Vinewood Bowl one. But I don't think I have any screenshots of them, only the Pisswasser Dominator and Blue Futo from the Eclipse Blvd chase team. Smurfy: illuminate - communicate - spectate 23:26, March 10, 2018 (UTC)

Hmm, been watching videos and the Vinewood Bowl and Eclipse Bvard ones and they both use the Blue one. Also, the files also list some custom Banshee 900Rs and Sultan RS's which have tonnes of modifications, but are the default blue colours and don't have any liveries - I have never seen them. Apparently part of the same mission. I've been thinking, maybe they're backups in case a failed spawn? Do you recall seeing em? Check my sandbox as I've listed one of the Sultans. Monk Talk 23:37, March 10, 2018 (UTC)

Not only are the cars based on F&F cars, but the NPC characters inside are definitely a homage to them.

They spawn in these specific pairs in each of the cars. 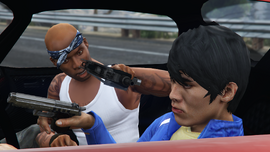 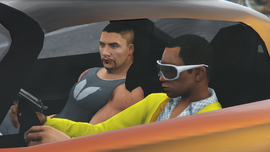 ? and Tej?
Add a photo to this gallery

The first pair are definitely Roman and Han; Roman with the bald head, african/american descent, the tattoos, the headband that he's seen wearing once or twice, and the white tank top, and Han with the long hair, the japanese descent and the blue jacket.

The second pair is a little more difficult. The guy on the right is probably Tej; he doesn't appear in Tokyo Drift AFAIK, but the hair style and the relatively skinny body shape kinda points me towards him, and the guy on the right, I'm not sure?

I wanted to add to the Car Bomb section that the Global Signal (Alerting other players that you're delivering Vehicle Cargo) does not go off until the bomb is disabled.

Also, i think when stealing Vehicle Cargo from another player, the Repair Cost is halved. I think i posted it long ago but it got removed

Retrieved from "https://gta.fandom.com/wiki/Talk:Vehicle_Cargo/Steal_Missions?oldid=1139066"
Community content is available under CC-BY-SA unless otherwise noted.