Should the name on the template say Edward T. Fortune even if it isn't confirmed in-game? I know that's what the diploma on his wall says but the same diploma is on Vic Manzano's wall. I think it should say unknown. Forcaster (talk) 00:39, March 7, 2013 (UTC)

The contact is referred to as United Paper Man during the credits for GTA V, so I was wondering if an admin could change the name to reflect this. And perhaps change Michelle (GTA IV)'s name to Michelle/Karen as that what she's credited as during the credits also. --Hellfire101 (talk) 02:07, September 23, 2013 (UTC)

Doing the new Doomsday Heist they refer to him as Bernard. Should change the page to reflect this? "The Contact, real name Bernard" or something like that? Pumpkin Zone (talk) 05:53, December 15, 2017 (UTC)

The conversation is 3 (4 if you count the player) way between the Player, Rackman, Lester and ULP and Rackman tells a party named Bernard to "stay safe" . She's not going to be telling Lester to stay safe, he already is safe. So it's either the GTA Online Protagonist or ULP. Pretty obvious which one of those 2 it would be. Smurfy: illuminate - communicate - spectate 19:59, January 16, 2018 (UTC) 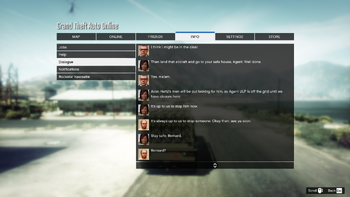 For all I know, "stay safe" is obviously not in literal meaning in this conversation, it's instead used as one of the many ways of saying goodbye. Plus given that ULP is out when he affirms Rackman's order, and it's Lester that says "see ya soon" first, it should be natural of her to respond toward Lester. Although in this case, she doesn't call him out by his real name, which fits Lester for being a discreet individual and having a covert op to manage at hand. Noirlime4L (talk) 20:44, January 16, 2018 (UTC)

How do you draw the conclusion that ULP is "out" at any point? Here is my take on the conversation after listening to it multiple times when this was first raised last month to try to gauge tone to determine who is being addressed. Smurfy: illuminate - communicate - spectate 21:07, January 16, 2018 (UTC)

ULP (to all): "I think i might be in the clear"
Rackman (to ULP): "Then land that aircraft and go to your safe house, Agent. Good work."
ULP (to Rackman): "Yes Ma'am"
Rackman (to Player and Lester): "Avon Hertz's men will be out looking for him, so Agent ULP is off the grid until we have closure here."
Rackman (to Player and Lester): "It's up to us to stop him now."
Lester (to all - incl ULP at the end): "It's always up to us to stop someone. Okay then, see ya soon."
Rackman (to ULP): "Stay safe Bernard."
Lester (to Rackman): "Bernard?"
—Dialogue between GTA Online Protagonist, Phoenicia Rackman, United Liberty Paper contact and Lester Crest

He is out. There's no point for him to stay in the comms as he's done his bit and received final instructions from his supervisor, This perfectly makes sense, or else he would make further comments on Rackman's speech later on. But the fact is, he doesn't. Also cosidering Lester hasn't interacted with ULP in any way (not in the comms nor physically), he won't have seen ULP again, especially when ULP is being hunted down by Avon and thus has to be "off the grid".
What still bothers me is that in your take, why would Rackman ignore Lester's farewell and instead address to a person she already greeted? (Couldn't have put it better, English really isn't my first language) Noirlime4L (talk) 23:08, January 16, 2018 (UTC)

(Reset indent)I respectfully disagree. Software support for voice recording, IVR, biometrics and analytics systems is what I do for a living, in English. If your take is right, then Rackman's voice actor (or the dialogue director) did a terrible job in this sequence, which she has not done elsewhere, so I'm going to stick with her doing a good job of making her tone apparent to my professional ear. Smurfy: illuminate - communicate - spectate 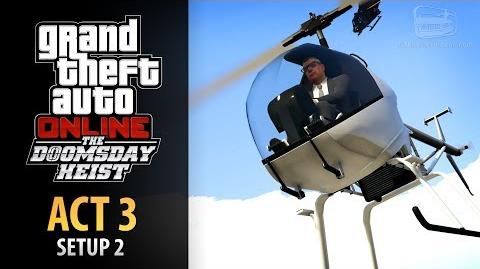 Since you seem to believe I am a lone voice against you here... let's do a tally up. Here are

others that also believe ULP = Bernard based on this dialogue. Just reading the subtitle script tells you nothing. As I said above, having listened to the dialogue multiple times to verify it when the claim was first raised, my professional ear 100% agreed with the conclusion that Rackman is addressing ULP.
Agent ULP is still part of the mission throughout the dialogue - it takes place before he safely lands at the Zancudo River. He just doesn't have any further lines to speak. ULP never appears again but Rackman interacts with Lester several more times and the name is never brought back up by either of them. Why would that be? No, it's not because it was some random fake name she came up with but because it was actually being addressed to ULP, not Lester. Smurfy: illuminate - communicate - spectate 10:11, January 20, 2018 (UTC)

Smh... You still haven't answered the question I raised earlier, look back up and do elaborate. Then again, the name doesn't reappear because both of them are aware of it being a hoax and should not be taken seriously. Moreover, missions thereafter are only led by people Lester has physically met (the players, Rackman, Agent 14 and Bogdan), while Bogdan is from a foreign rogue unit, he may not have heard about the ins and outs of the IAA, nor does he have to (or even worse, he doesn't know this op is operated by the IAA, only that it's something by "the Americans"). In setup "Air Defenses", after Bogdan leaves, Rackman calls Lester "Mr. Crest" as there are no outer parties involved at this point that could leak details of the operation or its affiliates. Noirlime4L (talk) 15:30, January 20, 2018 (UTC)

I'm unsure which question I have not addressed - If you mean "What still bothers me is that in your take, why would Rackman ignore Lester's farewell and instead address to a person she already greeted?" then I have addressed that directly - Lester farewells ULP and then Rackman farewells ULP because ULP is still a party (listening) to the comms because he is still flying the helicopter to the landing point at that moment, he hasn't magically disappeared to his safehouse. I have wasted enough of my time on this nonsense. YOU are the only one who thinks this name is some random hoax. It is staying on this page. If you don't like that, tough. Smurfy: illuminate - communicate - spectate 23:30, January 20, 2018 (UTC)

Why, of course! I thought we could reach a consensus, but now, thanks for letting me know that, speculation or not, an admin's opnion is always superior to that of others. Please don't waste your precious time to reply this, I have fully acknowledged. Noirlime4L (talk) 09:14, January 28, 2018 (UTC)

Fate: Determinant vs Alive vs Dead

I reverted your edit. This debate has happened several times and the general consensus is that while the player doesn't have to kill him, he is killed in that mission, if not by the player then via crossfire from all the other mercs in the area. Mandan14 (talk) 08:15, December 14, 2013 (UTC)

Guys, the contact ( UL Paper ) is defentely death in GTA V i know he can escape whitout being killed in the shootout.

but even if he didnt die there he still will be mentioned in the radio as Death so case closed.—Preceding unsigned comment added by RockstarFanboy (talk • contribs) 2014-09-27 11:21:19 Please remember to sign your talk page messages with ~~~~.

Yes he can survive but the radio still mention him as Death. —Preceding unsigned comment added by RockstarFanboy (talk • contribs) 2014-09-27 11:38:21 Please remember to sign your talk page messages with ~~~~.

The radio does not mention him specifically but if you insist, link me a recording or text of the radio article. —Preceding unsigned comment added by RJ2015 (talk • contribs) 2014-09-27 13:48:12 Please remember to sign your talk page messages with ~~~~.

Online confirms he is alive

His appearance in the Doomsday Heist Online (which has been determined to clearly take place after the events of Story Mode) clearly confirms he is not canonically killed in The Wrap Up. The players ability to shoot him and his subsequent reappearance (as is the case with all characters for whom this can occur) is easily explained by the "hospital bill" scenario in HD Universe titles. "Killing" an essential NPC actually only puts them in hospital and they survive. Paramedics even revive "killed" NPCs in GTA IV right in front of us. So in the world of GTA, a character isn't really killed unless the game somehow specifically confirms that. Smurfy: illuminate - communicate - spectate 01:14, August 12, 2018 (UTC)

Is there a possibility that the UL Paper Contact is inspired by the Cigarette Smoking Man from the X-Files? They are both "nameless", they both smoke cigarettes and they are both working for the government in shady ways. Prah (talk) 17:33, March 9, 2015 (UTC)

This page is now locked to staff only due to continual edit warring over the fate of the character. The Doomsday Heists appearance clearly proves he survived the events of GTAV. If you have valid edits to make, request them here. Page will be unlocked at some point in the future. Smurfy: illuminate - communicate - spectate 12:21, March 19, 2018 (UTC)

Can someone add the "GTA Online Characters" in the navigation section?

Can someone add the interwiki link for the german version of the ULP Contact? It's de:Agent ULP.