While I was surfing the web, I came across this image of two coast guard officers which matches the description found on The Port Authority of Los Santos. They wear life jackets with an American flag on their chest, and wear Navy Blue uniforms like the LSPD. I think I come across them once in GTA5 but that was a while ago. The image was uploaded by a user named AgentSanchez on discussion page about hidden peds. I also uploaded the image to the wiki as proof. With the summary containing credit to the original owner and a link to the original webpage. I also have two questions on the coast guard officers: Where do they normally spawn? and are they considered to be part of the Los Santos Port Authority or are they a separate Law Enforcement Agency? User:OnionsNeggs 8:15 PM

We have access to the Coast Guard NPC models in Director Mode
I don't know that anyone has bothered to determine when/where they "naturally" spawn. It's worth a look though as it is missing content from the wiki. Smurfy: illuminate - communicate - spectate 00:35, May 7, 2017 (UTC) 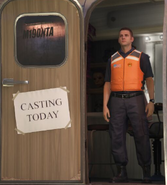 Back view.
Add a photo to this gallery

So, I've spent a fair bit of time today tracking these guys down. I could not find any at the port with LSPA logos. Only ones I could find were patrolling around Cape Catfish to El Gordo lighthouse during daytime, 3 in a Predator every time. Spawned in Free Mode and Director mode but not in Online. I have not yet searched during missions (e.g Scouting the Port). Clearly they have Lifeguard logos on their Coast Guard lifejackets and they acted like police when I collided with their Predator (instant 2-star wanted level and opened fire). Can anyone find LSPA evidence for these NPCs, otherwise they will just be created under Coast Guard (which is what R* has called them). Smurfy: illuminate - communicate - spectate 10:24, May 7, 2017 (UTC)

This morning a friend of mine emailed me this image of a coast guard officer and is just me or does the badge look a little different from the ones above. Of coarse Rockstar did have to make few minor changes for the enhanced edition. My friend also mentioned that this was once uploaded to the wiki but it disappeared. I don't know how or why, he just said it disappeared. User:OnionsNeggs (talk)

Yes, I noticed that the page history had images that were lost/removed. I have been looking on PS3 today, and can find none on land, day or night. Port security is always Security Guards. Coast Guard patrols are far more common though, particularly south and west of LSIA. You can even get 4 in a boat. Unfortunately I have no HD capture from PS3 and Snapmatic resolution is too low to make out the logo, so I resorted to a photo of the TV. Clearly a distinct Coast Guard logo, NOT the LSPA logo.

Close-up photo
Add a photo to this gallery

Would be keen to get PS4/XBone evidence added if we can. But so far we have:

LSPA law enforcement or not?

Is the LSPA law enforcement or not? They have booths in the port with Gruppe Sechs guards inside or around them and control checkpoints.  Also the LCPA and VCPA are marked as law enforcement. NalexandruN (talk) 19:13, July 7, 2020 (UTC)

The Gruppe 6 security guards are just that. Security guards. When getting a wanted level in the Port, none of the npcs there respond as law enforcement. Merryweather are aggro gang, security guards are aggro npc. Neither have law enforcement search functionality. No signage anywhere in the port indicates LSPA has any enforcement capability, and one sign even expressly states to call security, not the LSPA, in case of emergency. VCPA is irrelevant, 3D Universe. LCPA may be just as invalid as a Law Enforcement group, I just haven't got around to as thoroughly investigating them as I have with the LSPA. Smurfy: illuminate - communicate - spectate 09:37, July 8, 2020 (UTC)

Retrieved from "https://gta.fandom.com/wiki/Talk:The_Port_Authority_of_Los_Santos?oldid=1247593"
Community content is available under CC-BY-SA unless otherwise noted.