I really hope they introduce a female protagonist soon. It's not that I'm some kind of sex freak or something, I just think only dudes all the way gets so monotonous. Getalanoar (talk) 13:08, May 7, 2013 (UTC)

I doubt Franklin, Tommy and Luiz are the only ones who have been in prison. Wasn't Claude being transported between two prisons in the beginning of GTA III.

This was just a small thing I wanted to look over, it's nothing major.

"Franklin's 'beta appearance' can be seen in the first trailer of GTA V. He is thinner, less muscular and has many tattoos."

I'm pretty sure that this is referring to the street criminal we saw running away from the cops in trailer 1, however if you look at the character in the Dewbauchee GT at 0:23 we can see that the one in the car is actually Franklin himself and he had no tattoos with no real change in his appearance from the what we've seen in the recent trailers. In Franklin's character trailer he is shown wearing a tanktop and having a watch, or some sort of item, on his left wrist. If you look closely during 0:23 seconds in the first trailer the one in the Dewbauchee GT has the same attire, including the item around the same wrist.

We can see this again at 1:04. If paused at the right time you can clearly see that this is the same guy. And you can see the item on his wrist more clearly.

Good point, I wrote that actually, it should be removed due to your observation. So let me get it: Rockstar had the characters and the map done since 2011 but the game releases late 2013?Dodo8 Talk

Since Michael's name is now officially Michael de Santa, can someone change Franklin to Franklin Clinton now that it's also been revealed? Ryder 2012 (talk) 01:02, September 14, 2013 (UTC)

Someone leaked gameplay and someone named Tonya was on the phone with Jamal and she said it.http://www.youtube.com/watch?v=aPGfvfqx3VYFlyKidMir (talk) 04:35, September 14, 2013 (UTC)

In the first mission you personally activate for Simeon, Michael's name is on the wall as Employee of the Month in full:

As that is leaked information his name will not be changed yet. Wait until GTA V is officially released. Tom Talk 13:15, September 15, 2013 (UTC)

But "Michael De Santa" Was also leaked information from the leaked TV shows, why did he get an exception.

What TechPotato said. If Franklin's name won't be updated, then Michael's page and all of his family's should be reverted to just their first names. It comes from leaks, and if Michael's stays, so should Franklin's.:D (TCFF) 15:20, September 15, 2013 (UTC)

I didn't realise that was where that name originated from. I've removed it. Tom Talk

In some screenshots, we can see Franklin driving a Yellow 9F, which was thought to be his personal vehicle, but as we have figured out his vehicle is a unique Buffalo, this should be removed from the infobox as he doesn not receive a 9F during any part of the storyline. YokelBellic (Talk) (talk) 22:49, October 24, 2013 (UTC)

I am having a problem with that section of his info box. The words "Blaine County" needs to be in small letters but the LSPD Impound yard shows up in small letters as well. Can someone help? Matt Seay (talk) 13:01, September 18, 2014 (UTC)

I was playing around in the interior universe below the map while playing as Franklin, and I found this:

This contradicts the statement made on the page, saying that he's 6 feet tall. The image shows that he is several inches shorter, how shorter is up to you to analyze I suppose. Mortsnarg (talk) 03:01, May 12, 2015 (UTC)

The game uses several different character models for each character, so shots like this are not reliable. I have seen a post switch-scene scenario several times where the in-game model of Lamar Davis is the same height as Franklin. Does that mean Franklin is 6'4" or does that mean Lamar is only 5'8"? Neither. it just means the models are unfortunately inconsistent. The in-game documented evidence for Franklin's height is in the first Omega meeting. Director Mode for example uses a character model that makes all but a few male characters (e.g. Jimmy is an exception) a uniform height. smurfy (coms) 03:11, May 12, 2015 (UTC)

Well I know what Omega said, I remember that cutscene and what he said Franklins height is. Should we put down the multiple heights? There should only be 2-3 different ones, from what I've seen it's nothing more than that. I personally think the model that you play as shoud be the "official" one, considering that it's the model that players have the most exposure to. Mortsnarg (talk) 03:26, May 12, 2015 (UTC)

Well, it's not that he is not 6 feet, I just believe that the height measurement thing you saw in the interior is not usually supposed to be seen, so I dont believe they made it proportionate to the actual game and the size of everything in it. Why would they make a chart that you are not supposed to see accurate to the game world's size if no one is going to see it? Also, Omega says that he is 6 feet tall here : https://youtu.be/fcOKeHrZyo8?t=1m9s Snugeez (talk) 03:38, May 16, 2015 (UTC)

I don't think it matters if it was seen or not, it's what the scale said he was. Like I said in the response to Smurfz, I think the multiple heights (Omegas measurment and the scale measurement) should be recorded and put down. Mortsnarg (talk) 04:44, May 16, 2015 (UTC)

According to many YouTube reviews and opinions from gamers who I follow, Franklin is not favored by many players compared to Michael and Trevor, yet the reception says that he received as many positive critics as Michael and Trevor, I don't wanna mention anyone's name here, but at least four editors in this wiki dislike Franklin Clinton. My point is, the Reception section should be changed for a more accurate description.

I think we just have to go with what the reviewers (such as IGN etc) write. Personally, I agree with the sentiment and say that Franklin is my least favourite of the three protagonists, but the users you follow on YouTube are also gamers and no different to us on the Wiki. If we were to include a user's negative opinions on here, most pages would be filled with some form of negative comment. I think the reception categories are simply to represent the vast majority of reviews, likewise a negative reception would also be listed. Sam Talk 00:45, May 30, 2015 (UTC)
What did IGN say about Franklin? Anyhow, I say instead of going with the most popular REVIEWERS opinion, I say we should go with a general perception towards the character. Get some other opinions in there and I think go into what IGN said in particular. Just in general show what they meant and write a little more I suppose. I don't hate Franklin, I just think that he's WAY too similar to CJ to be taken as an "interesting character". Mortsnarg (talk) 00:56, May 30, 2015 (UTC)

I got it, I was just about to add the negative reviews from many YouTubers and gamers to the page so I had to ask the opinion of everyone, I don't like Franklin either, but that doesn't mean that my opinion is enough to change the page.

Ability to talk to animals

This is demonstrated in the mission Risk Assessment. How come it was removed from the abilities section? GMRE (talk) 10:34, May 30, 2015 (UTC)

You mean the Ghost Dog that no-one else can see? The scenario is not fully explained but it is made clear that this is no ordinary animal. It is more likely the dog had the ability to "talk" to a particular human, rather then the other way around, since Franklin is unable to communicate with Chop. smurfy (coms) 10:40, May 30, 2015 (UTC)

Just because the dog decided to walk away when Franklin was looking the other way, it's now labeled as a ghost? And maybe he just doesn't have anything to talk to Chop about? GMRE (talk) 10:52, May 30, 2015 (UTC)

It's not that, the reason why the dog is labelled as a Ghost is because he disappears as soon as Franklin reaches Dom and the fact that the dog only appears when Dom is in trouble. In addition, players were led to be believe that this dog is a ghost since an in-game internet article shows a nearly-identical dog and his death.

As long as he communicates with other animals other than the Ghost Dog, who I believe to have a unique ability to communicate to Franklin in particular.

And with that assinine comment, this discussion is over. The ability to communicate with Ghost Dog belongs to the animal, not the human he "talks" to. End of.  smurfy (coms) 22:46, May 30, 2015 (UTC)

Apparently I have discovered an irritating glitch involving Franklin's special skill, the glitch is, the skill won't increase, no matter if I follow how to increase his special skill, flow in traffic, have almost collisions and so on, the skill just wont go up! Can someone tell me how to fix this annoying glitch? Like seriously, hasn't anyone noticed this issue either, or am I the only one dealing with this glitch? Help is much appreciated. Nikolai Banks (talk) 13:17, May 7, 2016 (UTC)

Girlfriend or just a booty call? 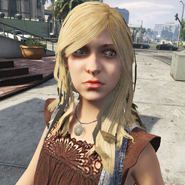 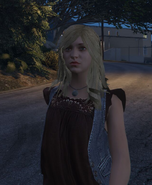 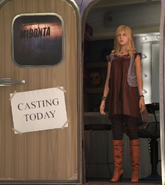 Director Mode.
Add a photo to this gallery

Is she worth a page? It is always the same NPC model (the Art Student in Director Mode/Actors). I managed to get her out of the cab once to get a portrait. Smurfy: illuminate - communicate - spectate 09:39, February 25, 2017 (UTC)

Hey, I think there is another one that is related to Franklin's phone - the HTC Sensation. Mind if you can verify it?BorkBorkSWEDEN (talk) 05:44, April 15, 2018 (UTC)
Retrieved from "https://gta.fandom.com/wiki/Talk:Franklin_Clinton?oldid=1148487"
Community content is available under CC-BY-SA unless otherwise noted.