Are we sure it is still Didion Drive? The southern part is definitely correct. But the section that connects with the east end of Cox Way and western end of Wild Oats Drive until it gets to Milton Road is very debatable. I know the HUD street display is terrible, but I can only ever get it to label it Wild Oats Drive if travelling east-west even when I'm careful to avoid actually touching Wild Oats Drive.

The house numbering doesn't really help too much. That northern section doesn't fit with the eastern section numbers at all. 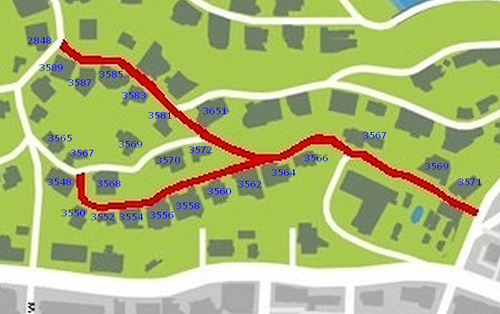 Yes, I've checked it too and I'm sure the northwestern section is still Didion Drive, but it can be really annoying how the street names show up randomly. About the house numbering, maybe the developers designed the area before thinking about the street names, or they were changed afterwards. In the map that comes with the game disk, the name Didion Drive doesn't even appear, but Cox Way and Wild Oats Drive do. DocVinewood (talk) 15:47, January 10, 2015 (UTC)

Yeah, thanks Doc. I managed to commit a crime outside number 3585 and the police dispatch also clearly ID'd Didion Drive. Nothing surprises me now with the Rockstar devs, just look at the 2 completely disconnected sections of Grapeseed Avenue.  smurfy (coms) 21:38, January 10, 2015 (UTC)

Sorry guys, but just now I've got time to reply you. Hey Smurfy, there's also the treacherous Signal Street with  two isolated sections that I don't dare to map (not now). But about Didion Drive, the physical map could help a lot, but in this case we have only the gameplay available to check it out. So, I checked the street name from 4 places and it is still called Didion Drive:

3 - On foot and off the street, from the intersection of Milton Road and Picture Perfect Drive, heading east until reaching the street;

4 -  Again, on foot and off the street, heading south from Kimble Hill Drive.

I also tried to commit a crime nearby several times, but there was no dispatch at all (at least for me)

At least by checking the gameplay it was pretty clear for me that the two sections are Didion Drive (I know the gameplay HUD is not that reliable, I had troubles understanding North and South Rockford Drive) . BTW, the locations of these pages are wrong, since number 3587 is actually on Didion Drive. What do you guys think? Thegtaseeker96 (talk) 04:14, January 11, 2015 (UTC)

Revisiting this 2 years later... documenting the Lenny Avery Realty listings and listing 6 claims to be on Didion Drive but is clearly on the section of Cox Way marked on the map as Cox Way (number 3569).

I explained it away by claiming it was real-estate trickery rather than a glaring developer error.

However. Listing 8 claims to be on a previously unmarked location called "Vine Drive" and is actually the home at the top end of Didion Drive at the junction with Milton Road.

Retrieved from "https://gta.fandom.com/wiki/Talk:Didion_Drive?oldid=996598"
Community content is available under CC-BY-SA unless otherwise noted.