Carolina Ravassa
“This girl - Taliana. She's supposed to be good, and she'll work for way less than she's worth, if you'd believe that. I'm not going to pass her up.”
— Michael De Santa

Taliana Martinez is a character in Grand Theft Auto V, that appears in the Random Event - Crash Rescue. After this, she becomes a potential getaway driver for the heists. She returns in Grand Theft Auto Online as part of the The Diamond Casino Heist.

Taliana has excellent driving skills and composure. Her weakest skill is vehicle choice which is only average (but which has no effect on gameplay, since in The Bureau Raid her choice of vehicle allows for a clean getaway, and in The Big Score her vehicle is assigned). Despite her very good skills, her heist cut is only 5%, which makes her a perfect choice as a getaway driver. Taliana has a very strong personality and will not accept being insulted or degraded by other people. The best example of this is during The Bureau Raid, if the player chose the roof approach. Near the end of the mission, Michael calls the crew members a bunch of clowns and she becomes rather irritated, threatening that if Michael does not apologize she will take the getaway vehicle's wheel and drop the lot back off in front of the FIB building.

Not much is known about Taliana's past: the only thing known about her is what she tells the player during her random event. After some persuasion by whichever character picked her up, Taliana explains that she was a getaway driver for a gang robbing a pawnshop, but the robbery was a sting. Two were captured with one managing to get in the car with her. Taliana successfully evaded the cops and passed three roadblocks but the remaining gang member pulled a knife on her while she was driving at 100 miles per hour, causing the crash and killing the gang member.

Taliana is first seen on a random event found in the Great Ocean Highway around Mount Chiliad and Braddock Pass after the The Jewel Store Job has been completed. The player will find an Emperor upside down in a ditch and on fire. Taliana will crawl from the wreckage.

The player needs to be careful, her jacket makes her blend into the ground, so the player may accidentally run her over. In addition, the player needs to make sure that they do not park a car (if they are using one) too close to Taliana while she is still lying on the ground, as when the protagonist exits the car, the door may hit and kill her.

The player must give her a lift to Sandy Shores so that she can be patched up, and the player must get her there quickly or else she will die. Trevor Philips can not deliver her to the Altruist Cult, due to her poor state of health.

The random event of encountering Taliana can recur at a later time if she does die, giving the player another chance to gain her as a crew member.

After the player takes her to the marked destination, she will offer her services in any future job the player might have.

In The Bureau Raid, roof method, if she is chosen, she will make it just in time in an ambulance to help the others escape, allowing the crew to escape the FIB Headquarters without a wanted level and police chase.

In the subtle approach of The Big Score, if she is chosen to be the first driver, she has no problem at all and manages to get all the gold in the cars; She will also be able to escape the police and deliver her part of the gold to the trucks. If placed as the second driver, to change the tires of the Stockade, there will be no worrying consequences.

If she is chosen for the obvious approach and is placed as the pilot of the second helicopter, she will reach the train with no problem as long as Trevor keeps the helicopter steady for Lester to destroy the Buzzards, otherwise they shoot down her helicopter, killing her and losing half of the gold. If selected as the driver of the train, she will also be able to do a good job.

Taliana appears as a selectable driver for The Diamond Casino Heist. She is classified as 'good' and takes a 7% cut.

In the preparation "Getaway Vehicles", Taliana can provide the following vehicles: 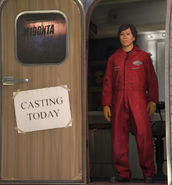