Standard White - 100%
“Human-led design is a thing of the past. This is what happens when you fire your R&D department and leave a supercomputer alone with a textbook on computational fluid dynamics and some provocative anime. End result: to drive a Taipan is to put yourself at the mercy of a ruthless, inhuman dedication to pure speed and improbable curves. Be afraid.”

The Cheval Taipan is a supercar featured in Grand Theft Auto Online as part of the Southern San Andreas Super Sport Series update.

The Taipan is strongly based on the Hennessey Venom F5. The front bumper strongly resembles that of the second generation Ford GT, while the rear design shares some similarities with the Trion Nemesis, as well as the McLaren P1. The vents on the hood, exhaust and the doors resemble the McLaren Senna.

The Taipan is distinguished by its aerodynamic styling, featuring a large front intake and two small vents, along with a carbon-fiber detail at the bottom and surrounding the intake, bearing the Cheval lettering on the driver side. On the upper edges, two black vertical housings can be seen, each one featuring three differently-sized circular headlights. The hood area features two intakes separated by a single frame and the manufacturer emblem on the front.

The sides denote its sporty nature, featuring rear-facing ducts next to the front wheel arches and side vents just past the doors, along with carbon-fiber skirts bearing the corresponding badges on the rear portion. The greenhouse area makes use of painted rear-view mirror shells and rear-quarter panels, while the engine bay area is completely covered.

The rear of the car is mostly unique in design, featuring a carbon-fiber panel holding the light strips on the upper area, outer edges and lower center, the latter surrounding a small vent. The lower area is occupied by a rear end with a black Cheval marking and a carbon-fiber diffuser, with various separations and a dedicated spacing for the triangle-shaped exhaust setup. The license plate can be seen on the passenger side, while a carbon-fiber spoiler is installed by default. Its underside is mostly covered, with black panels on the outer portions and a carbon-fiber plating on the center, leaving the rear axle exposed.

The interior of the Taipan is the same used on the Truffade Nero Custom, with minor tweaks to fit the car’s design and manufacturer, and as such, the Cheval horse logo is featured on the horn cap of the steering wheel, as well as the company name, these are also stitched into the seats of the car.

The primary color of the car is applied on the body, interior stitching and paddle shifts, while the secondary color is applied on the hood vents, roof, rear panel, side intakes and the center of the rims. A trim color is also available for the dashboard, door panels and seats. Its wheels are shared with the XA-21, with the Ocelot emblem replaced with the Cheval horse, the Cheval badge is also on the center-dividing spokes.

The Taipan emits an electrical beep when the engine is turned off. The same sound effect is heard on the Tempesta, 811, Nero Custom, Specter and the SC1. 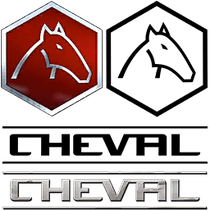 The Taipan exceeds in the performance class despite its relatively quiet engine. The car provides plenty of traction due a high amount of statistical downforce, keeping the car stuck to the road surface during racing and aiding towards its excellent handling. However, the acceleration of the car is not on par with most other cars. Despite this, the Taipan makes up for that with its exceptionally high top speed, allowing it to, with given time, easily outrun other super cars such as the Nero Custom and X80 Proto on a straight, flat track, but is still no match for the Pariah and the leading supercar, the Tezeract.

Due to the vehicle's enclosed rear clam, the car does not feature an engine model, like the Zentorno and Insurgent.

This gives the vehicle, when fully upgraded, one of the highest top speeds in the game, as of the Southern San Andreas Super Sport Series, beaten by the Pariah, Entity XXR and Tezeract, and surpassing the Adder and Vigilante when fully upgraded. In stock condition, the vehicle's top speed matches several other super cars, including the Nero Custom and X80 Proto. Its speed is still surpassed by the Pariah in the sports class, however. [2]

The Taipan has all four advanced flags enabled[3]:

Promotional screenshot of the Taipan. 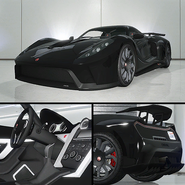 The Taipan on Legendary Motorsport.

The Taipan on the updated Rockstar Games Social Club.

The Taipan in the Cinematic preview on Rockstar Games Social Club. 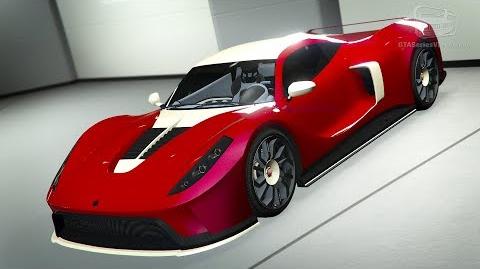