Standard White - 100%
“After a day of synergizing teleconferences in your underwear, nothing provides an escape like the Tailgater S. Go to the right auto shop and you'll have a car that looks like a street racer on the outside, while on the inside it gives you the kind of air-conditioned comfort you need to pull over and give 110% in your team's 9pm Idea Shower.”

The Obey Tailgater S is a 4-door sports sedan featured in Grand Theft Auto Online as part of the Los Santos Tuners update.

The vehicle is primarily based on the Audi RS3 and Audi S5, with the headlights, the C-Pillar and the lower front intakes derived from third generation Volvo S60. The shape of the grille seems to be inspired by the 2021 BMW M4, which can be seen in the grille's octagonal design that's more akin to BMW's design rather than hexagonal one found in the Audi's. Taillights seem to be a mix of the RS3 layout with more round shape similar to the taillights found on the Mercedes-Benz V177.

The vehicle appears as an updated, sportier iteration of the original Tailgater, featuring a bulkier but more aerodynamic bodywork. The front end of the car has a small meshed intake with four vertical elements on the centre, along with additional mesh intakes on either side, intended to direct air flow to the front brakes. The central portion of the car is largely dominated by a mesh grille, which bears the manufacturer emblem on the upper side and mounts a number plate on the lower side, while the sections beside the grille house modern, LED-like headlamps and small indicators on either side. The bonnet has a slightly impressed area on the centre and opens to reveal the engine bay and a strut brace.

On the sides, the car has distinctive body lines conforming the skirting area, the wheel arches and the lower portions, as well as upper lines passing through the entire car, starting from the outermost edges of the front indicators. The greenhouse area is relatively large, featuring silver trim on the side windows, black trim around the windscreen and rear window, and black inner pillars, together with mirror shells with coloured upper halves. The roof has a single vortex generator on the rear.

The rear section of the car has a small lip spoiler at the end of the boot, while the rear end bears the manufacturer emblem below, the Obey badging on the lower right corner of the boot lid and the number plate on the centre. The car has large tail lamps divided in four units, whose outer ones consist of upper red main lamps and lower amber indicators, while the inner ones are housed within the boot lid and consist of the upper red brake lamps and lower white reverse lamps. The rear bumper is relatively basic and features two red units/reflectors with a slightly inset detail between these, as well as a black portion with mouldings for the circular exhaust tubes.

The interior of the vehicle is similar to the one from the Exemplar, being a white/paintable variation of the one from the aforementioned car, as well as the Rapid GT and the Massacro. The Obey logo can be also seen on the horn cap.

The Tailgater S has superb traction despite its RWD layout, and has a decent top speed and handling. However, its Achilles heel is its weight, which hinders its acceleration and will make the car struggle against vehicles such as the Calico GTF, Jester RR and even the Comet S2. Braking power is also average due to the weight and despite turning well, it tends to understeer if one turns a sharp corner flat out. Its advantage, however, is that it has good resistance against collisions, and the wheels won't bent easily compared to similar cars, making it an ideal choice for getaways and transport.

The vehicle is powered by a V8 engine, which can be also customized with intake manifolds and rail covers, giving it a bulkier appearance. Said engine is coupled to a 6-gearbox in a front engine, rear wheel drive layout. It shares the same engine sound with the 8F Drafter. 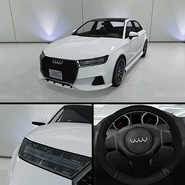 The Tailgater S on Legendary Motorsport.

The Tailgater S in the cinematic preview on Rockstar Games Social Club.

The "Sci-fi" livery may be based on the Audi Q4 e-Tron Prototype livery.