"Luxury German Sedan. Better than a BF, but not quite a Benefactor. Fast and practical with a classy look, this is just the car to over-leverage on."
―Southern San Andreas Super Autos description.

"Look at this car and ask yourself what price would you place on style, status and sophistication? Then forget that price because I offer flexible payment schedules to suit any budget. Don’t let society and banks tell you what you can and can’t afford. No credit? No problem! You’re approved! I want everyone to live the American dream just like me."
―Simeon Yetarian

The front end of the car features a dominant grille which decreases in width as it gets closer to the lower edge of the bumper. Unlike Audi models, this grille only occupies the upper half of the front face, and features rounded chrome edges with two horizontal chrome strips. Directly below the grille there are two ducts which have circular fog-lamps. 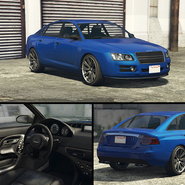 The Tailgater on the Southern San Andreas Super Autos website in the enhanced version of GTA V.

The Tailgater on the Rockstar Games Social Club.
Add a photo to this gallery

Retrieved from "https://gta.fandom.com/wiki/Tailgater?oldid=969419"
Community content is available under CC-BY-SA unless otherwise noted.