Grand Theft Auto V
“I know Tahir. I did his home theater... He lives in Chumash.”
— Ferdinand Kerimov tells Steve Haines about Tahir in the mission By the Book

Javan was born in Azerbaijan and moved to the United States at the age of thirteen, eventually settling in Chumash, just outside Los Santos. Javan became a businessman, making his fortune in the green energy sector, and funded several education initiatives both in the United States and Azerbaijan.

However, the International Affairs Agency and Federal Investigation Bureau both believe that Javan is linked to terrorist organizations.

In an attempt to find information on Javan, first the IAA and then the FIB kidnap and interrogate Ferdinand Kerimov, a home theater technician who installed equipment at Javan's property in Chumash. Kerimov is tortured by Trevor Philips on the orders of FIB agent Steve Haines. Kerimov eventually leads Michael De Santa and Dave Norton to a hillside overlooking Javan's house, where Javan is hosting a house party for various guests, including four others who look almost identical to him. Initially Javan can be seen preparing lines of coke on a coffee table at the party, and later moves out onto the terrace to smoke.

Following further torture of Kerimov, he eventually gives a detailed description of Javan being heavily bearded, chain-smoking and left-handed. Using this description and a process of elimination of the lookalikes (only one of the other four bearded lookalikes is also smoking, but he uses his right hand), Michael kills Javan with a Sniper Rifle.

“A beach front house party turned into tragedy yesterday when an Azerbaijani-American was killed, in what appeared to be a professional job by a long range sniper. Police are baffled by the case not merely because they are baffled by most things, but also because no motive is apparent. The man, Tahir Javan, an Azerbaijani-American in his late 40s, moved to this country when he was 13 and grew rich in the green energy sector, and has subsequently donated large sums to education initiatives here and his former country. Who would offer a professional hit on him and why, or whether this was a professional hit or a psychotic rank gone dangerously wrong is still unclear. Tahir was a smoker, a bon vivant and a lover of life and all that was precious. "Why would anyone want to kill him? He didn't have any enemies, just friends and friends he hadn't made yet. We all loved him," said partygoer Rachel Withers, who described herself as "something big in greeting cards".”
— Los Santos Shepherd Newspaper
“Philanthropist murdered at a house party in Chumash. Party goers at a house in Chumash were horrified yesterday when a guest was killed seemingly by a sniper's bullet. Tahir Javan was smoking on an outside terrace when he was gunned down. Police are baffled as to why this much loved Azerbaijani-American who was a noted philanthropist and community leader would be targeted.”
— Weazel News (Radio)

Doing coke at the start of the identification process. 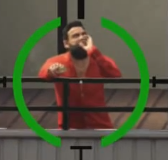 Tahir Javan seen in the mission.