Gang Tags, or graffiti tags, are a type of collectible item in Grand Theft Auto: San Andreas, found only in Los Santos.

Carl Johnson has to search for a total of 100 gang tags all around Los Santos and spray over them with the Grove Street Families' emblem with a Spray Can. A tag needs at least 29 units of spray can "ammo" to be completely sprayed over. Tags and their basics are first introduced during the mission Tagging Up Turf. Spraying over an enemy tag increases the player's respect and respraying all 100 tags is required for 100% completion.

Upon completing all the gang tags, the player will receive certain rewards. These are:

For more detailed locations and photos of the graffiti, see here.

The gang tag for Grove Street Families and the one the player resprays over enemy tags. 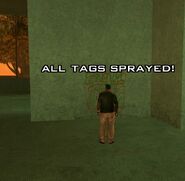 Message given after all tags are sprayed