The vehicle is essentially an extended variant of the Boxville, which is operated by Attack-a-Taco and is purposed for selling Tacos and other Mexican food.

The vehicle retains most of the features from the Boxville, but the sides have black, plastic strips running through the bottom, and gray panelling with criss-cross patterns. The left-hand side has a single access door for the driver and an air conditioning unit sticking out from the rest of the vehicle, while the right-hand side has a wide stand with a fully-functional compartment door (which is always closed). The roof has large windows on top and may have a roof sign displaying the company's name as an extra (which may detach upon hard collisions).

The interior dashboard remains the same as the regular Boxville, which, in the enhanced version, uses the "Van" analog dial set. Around the back section, however, there is the single driver seat and several compartments with additional goods, being Phat Chips, P's & Q's and The Nut House snacks, ECola and Sprunk sodas and Bean Machine coffee cups.

The vehicle only spawns in a white color for the bodywork, with a yellow livery and the company's markings around the vehicle. According to the livery, it serves the following Mexican dishes: 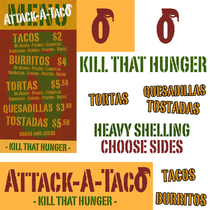 Much like the Boxville, the Taco Van is a heavy rear-wheel-drive vehicle. Its engine is capable of powering it up to moderately high speeds, but acceleration suffers, likely due to its heavy weight. Poor weight distribution makes the vehicle prone to tipping over when cornering at high speeds, and due to its significant body roll and heavy weight, it is prone to oversteer as well. However, its weight can be used as an advantage when trying to ram other cars off the road.

The vehicle is powered by a twin-cam inline-4 engine, mounted with a large chrome turbocharger, laid longitudinally in a front engine, rear wheel drive configuration, using a 4-speed gearbox. The engine sounds to be a low revving diesel engine with slow valve timing, similar to the Boxville.

Details of the Taco Van, featuring some optional foods and drinks. 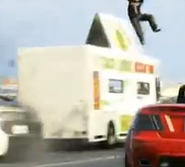 The food options posted on the menu on the side of the Taco Van.

A Taco Van with the side door opened.