GTA Wiki
Register
Don't have an account?
Sign In
Advertisement
in: Pages with unsourced statements, Businesses, Businesses in GTA IV,
and 25 more
English

The Totally Wireless Internet Cafe (TW@; pronounced twat) is an internet café that appears in both the 3D Universe and the HD Universe. It is interactive in Grand Theft Auto IV and its episodes.

The "TW", in "TW@", stands for "Totally Wireless", as can be seen outside some TW@ Internet Cafés. This phrase is a take on "Totally where it's at."

"TW@" is a reference to twat, which is a British and (sometimes) American slang term for a vagina, and is often also used in offensive manner to imply someone is an "idiot" or "annoying".

In Grand Theft Auto: Liberty City Stories, set in 1998, three years earlier than GTA III, the TW@ café is under construction. Its posters read - "Come and see the grand opening of TW@", yet another obscene reference to the word twat.

In Grand Theft Auto IV, TW@ internet cafés are popular and at least one can be found on every major island. TW@ cafés can be used to browse the in-game websites and are accessible from completion of the mission Logging On, where the player has to set up an Eyefind e-mail account. It costs $1 to use the computer. The cafés can be robbed by simply opening the cash register, awarding the player an amount between $9 and $199. However, doing so will usually result in a one-star wanted level. This can be avoided, if the player crouches behind the counter of the Snack Shop, out of sight and then opens the cash register, they will not be spotted by the cashier. In the introductory cutscene to the Logging On mission, Roman actually speaks the name of the establishment, confirming that it is indeed pronounced "twat".

In The Ballad of Gay Tony, as well as The Lost and Damned in the standalone Episodes From Liberty City version, the computers have a new wallpaper: a dark background with a silhouette of the Liberty City skyline and the phrase "I ♥ LC". This may be a reference to the "I Love New York" logo, which the name of the mission "I Luv LC" also references.

In Grand Theft Auto: Chinatown Wars, a TW@ PDA theme is available to use. TW@ Internet Cafés are also present in North Holland, East Hook and a new one is located in Easton, but all of them are inaccessible.

The same place as in GTA III. The store is under construction.

There is an internet café on each of the three main islands. 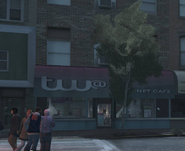 One of the locations on Vespucci Boulevard was seen in a promotional screenshot with the name Wan Ka Internet Café (왕카인터넷) in Grand Theft Auto V. This name was replaced with Totally Wireless (Tw@) once the game was released.

Interior of the TW@.

Screenshots of GTA 1 and GTA 2 on TW@ two computer screens. 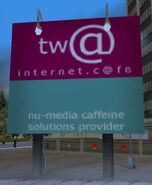 An advertising of TW@ in Torrington.

The interior of TW@'s Broker branch, GTA IV. All three TW@ branches in the game use the same interior. 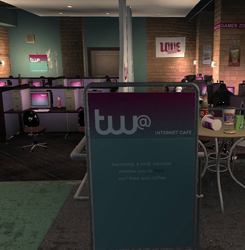 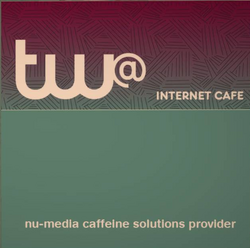 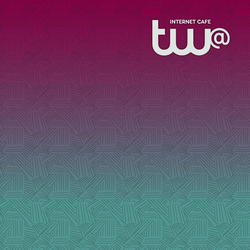 The TW@ wallpaper seen on computers at TW@, GTA IV. 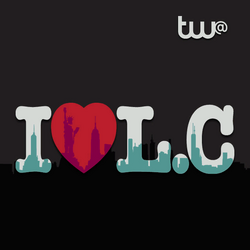 The "I ♥ L.C" version of the TW@ wallpaper seen on TW@ computers in the DLC version of TBoGT, or the EFLC versions of TLAD and TBoGT. 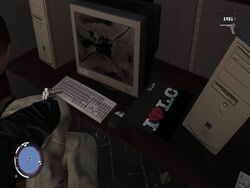 ... and "I ♥ L.C" screens are actually props on the monitor.
Websites Posters (From left to right)