Its only store is located on the corner of Portola Drive, Carcer Way and Dorset Drive in Rockford Hills, Los Santos. The store occupies a corner site and the window display would indicate it sells women's handbags. Also, a large banner with TSLC's logo can be seen at the Rockford Plaza in Burton, however the company has no visible stores in this location.

In Grand Theft Auto Online, the company appears as a minor sponsor on the custom liveries for the 190z.

The TS in TSLC stands for 'Tracee Sharan', as shown on various shirts worn by female pedestrians.

The brand seems likely to be a play on DKNY with the NY obviously being replaced by LC for Liberty City.

Front of the store.

Side of the store.

Handbag in the window. 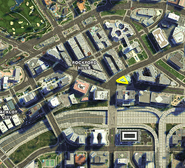 Location.
Add a photo to this gallery
Retrieved from "https://gta.fandom.com/wiki/TSLC?oldid=1152794"
Community content is available under CC-BY-SA unless otherwise noted.