The TOYZ van has mediocre acceleration and lousy steering just like its civilian counterpart the Pony, they seem to have no differences in handling probably due to the fact that it was merely used as a trigger point for the RC challanges rather than to be driven directly.

The Toyz'n The Hood logo on the GTA III's Toyz. 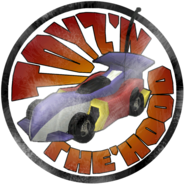 When found and entered, it starts a mission where the player uses remote-controlled cars in order to destroy people and property, rampage style, and sometimes an RC checkpoint race is activated instead. During these side-missions, the vehicle cannot be moved or exited, so care must be taken not to set it on fire by setting off explosions too close to it.

One can avoid starting the RC missions by pushing the van forward about two car lengths OR by taking it while on a mission. If done correctly, the player will not trigger the side missions and can drive the van as normal.