Standard White - 100%
“Did you know that if this country took all the money it spends on schools, civic infrastructure and space exploration, and invested it in military R&D, we could produce some really innovative tank designs? The Khanjali is a loud, fast wakeup call to get our priorities straight. And with the kind of upgrades this thing has available, you better hope we're listening.
Please note: This vehicle must be stored in a personal facility and can be modified at the Facility Vehicle Workshop.
”
— Warstock Cache & Carry Description

The tank appears to be based on the PL-01 Polish light tank, evident by the overall shape and purpose.

The Khanjali is depicted as a modern light tank with a similar build to the Rhino Tank, but using what appears to be a stealth body. The front of the hull uses various modern lamps on the centre and on the edges, while the top area assumes a wedge-shaped profile with access hatches for the driver and a front occupant. The sides have various armour panellings covering most of the tracks, with the rearmost ones having "TM-02 Khanjali" markings. The rear end has vertical modern lamps and vented sections on the outer sides, while the centre has two access doors for the rear occupants. The turret has a sighting unit on the right-hand side, four radar compartments and what appear to be four sensors on each "quarters" of the turret.

Unlike the Rhino, the Khanjali features fully-rendered interiors; the front compartments have several instruments and display screens derived from vehicles like the FH-1 Hunter and the Akula (though with no dials mapped on these due to the turret-perspective view), while the rear section has seats and textures similar to the back section of the Titan and contains two wall-mounted Railguns for decoration, as well as two electronic periscopes with control sticks on them.

The Khanjali features a wide array of colour combinations: the primary one is applied on the entirety of the hull and the turret, while the secondary one is applied on the side armor panellings and the aforementioned radar compartments. A turret/tertiary colour is also available for the handles of the front hatches and the mountings of the remote weapons. It uses two continuous tracks that are identical to the ones from the Rhino Tank.

The vehicle is equipped with a tank cannon and a remote machine gun turret resembling a Browning M2HB .50 caliber machine gun. It can be also modified to have two remote grenade launchers (which seem to be based on the concept weapons depicted in the real-life iteration), while the main cannon can be replaced with a Coil railgun cannon with similar features to the hand-held version, albeit having seven large coils.

The Khanjali performs, as can be expected, of that of a tank. It moves slow like the Rhino Tank, but seems to have a slightly faster speed than it. It has great off-road capabilities due to its traction and appears to be slightly more nimble than the Rhino in terms of quick turns. Performance upgrades can also improve the overall handling of the tank, as it can accelerate faster.

The tank is powered by two diesel engines, and the engine sound is the same as the ones from the Phantom Custom and the Hauler Custom.

The Khanjali has the same durability as the Rhino in stock form. However, armour upgrades can prove to be extremely beneficial for the vehicle, allowing it to survive nearly twice the amount of explosives than the Rhino. One large advantage of the Khanjali over the Rhino is that it can reliably crush and drive over cars without them exploding due to the lighter weight, which won't cause self damage and allow the Khanjali to be used without having to worry about explosions from other cars crushed under the tank.

The Khanjali has access to a variety of weapons that are assigned to each occupants, making a devastating vehicle when fully occupied:

The TM-02 Khanjali can only be modified at the Vehicle Workshop inside a Facility.

The rear compartment of the TM-02 Khanjali. 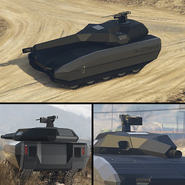 The TM-02 Khanjali on the updated Rockstar Games Social Club.

The TM-02 Khanjali in the cinematic preview on Rockstar Games Social Club.