"Tell your liberal neighbors you bought the Progen for its 'fuel efficiency' and reduced 'carbon' emissions, when you really got it because they hooked an electric motor to a twin-turbocharged V8 engine just to give it extra juice. Like a toaster in a bathtub, this is a dangerous synthesis of technologies old and new. Be progressive in the only real sense of the word."
―Legendary Motorsport description.

Overall, the T20's main body design is almost identical to the McLaren P1, including the curvature of the hood as well as the rear lights, guards, fascia and spoiler; however the headlamps and front bumper are more reminiscent of the McLaren 12C. The car features a modification adding large intake on the hood, intakes on the roof, and splitters on the front and sides. A large carbon-fiber composites as a grille at the front of the vehicle.

The T20's doors appear to be based on the design of a butterfly doors, based on the fact the doors appear to rotate about the A pillar upon opening, however, they also appear to rotate along the vertical and horizontal track of the vehicle, and also rotating away from the vehicle itself, giving it a mix-match of scissor and butterfly door mechanics, unlike more recent models, such as the GP1 and Tyrus, which do not behave in this manner. The implementation of the butterfly doors for the T20 is similar to the real P1's butterfly doors. It also features a functional mechanical spoiler, being the first in the series to do so, which automatically raises at approximately 40 mph and has different modes for driving, braking, and idling. 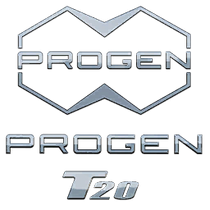 The T20 has impressive acceleration, and a very good top speed. The car's nippy handling helps it smoothly transition from lane to lane on highways, but poses as a threat in busy traffic, since the handling can be unresponsive from time to time. The vehicle's spoiler will raise when the vehicle is traveling at approximately 40 mph, and tilt on its axis to improve downforce over the rear axle and improve aerodynamic flow. Under braking, the spoiler will tilt forwards and down, increasing the surface area hit by airflow, thus acting as an air brake and slowing the car down quicker.

The car's engine appears to be a powerful, high revolution V8, similar to the real-life McLaren P1. An aluminium cover surrounds the engine, to conduct heat, which would normally be a potential threat with an engine so close to the cover. A glass cover is placed directly above the engine's manifolds. The car features intercoolers located directly after the side-intakes, suggesting the car is turbocharged. The exact same engine model is found in the Cheetah, Turismo R, Osiris, Reaper, and FMJ. However, the exhausts of this model are not extended as far since this car's rear clam is not hinged.

Braking is very responsive due to the fitted spoiler, and the car's AWD layout helps the car pick-up speed after stopping, in almost an instant. 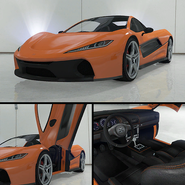 The T20 on Legendary Motorsport in the enhanced version.

A promotional screenshot for vehicle's release in the Ill-Gotten Gains Part 2 DLC.

Retrieved from "https://gta.fandom.com/wiki/T20?oldid=1174531"
Community content is available under CC-BY-SA unless otherwise noted.