The Switch Scenes (stylized as SWITCH Scenes in-game) are the small cutscenes that occur when the player switches from one playable character to another in free roam in Grand Theft Auto V. The cutscenes vary by player and circumstances going on in the game's storyline. Each character has a number of unique cutscenes.

The player is free to switch between any of the available characters at any time they want in free roam, unless the player has a wanted level, or is in the middle of a mission.

The following switch scenes will occur after the events of the mission "Did Somebody Say Yoga?", where Michael's family moves out of the house, leaving him alone.

The following switch scenes will occur after the events of the mission Reuniting the Family.

These unique Switch Scene will occur only if the player switches to Michael right after or soon after completing a mission.

The player is automatically switched to Michael prior to completing the mission Hang Ten, in which he is in a phone conversation with Lester. Lester tells Michael that Trevor has taken over the Vanilla Unicorn. Michael agrees to meet there to plan the next mission.

Claiming to have been at a movie.

Lamenting the loss of his yacht.

With Amanda at Gentry Manor cafe.

Letting Jimmy out at a Vinewood Pawn shop.

Franklin has the least variety in his switch scenes, and even as the storyline progresses, the change is minimal, only reflecting his life in his new Vinewood Hills home.

After The Hotel Assassination

The following switch scenes will occur after the events of the mission "The Hotel Assassination". These mostly focus on Franklin's life in his new Vinewood Hills home.

Between "I Fought The Law" and "Pack Man"

Adder spawning in a traffic jam.

Drunk but not getting drunker.

Farewell to a blonde.

A recurring motif with Trevor is that he might be passed out drunk in a random location around the map. He will slouch over and wake himself up while looking around startled. He will smash the beer bottle he is holding and make a comment regarding his situation.

Drunk in an alleyway.

About to smash a guitar.

Waking up in a dumpster.

Sniffing panties at the Vanilla Unicorn

Under the Del Perro Pier. 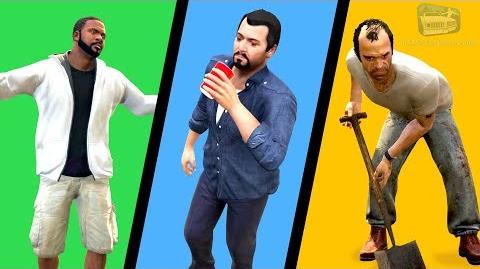