Standard White - 100%
Not to be confused with the Stinger, another classic sports car with a similar name in Grand Theft Auto V and Grand Theft Auto Online.
“The Ocelot Swinger was supposed to be a myth. A few blueprints got passed around by collectors, but it just didn't seem possible: the aerodynamics were decades ahead of their time, the engineering too complex for a classic car, the bodywork so alluring that just feathering the clutch would feel like cheating on your spouse. But now, thanks to the power of assembly robotics and easily monetized nostalgia, the legend has finally hit the streets.”

The Ocelot Swinger is a classic racing car featured in Grand Theft Auto Online as part of the After Hours update.

The Swinger heavily resembles the Jaguar XJ13, with the back resembling the Lucra LC470.

The Swinger is distinguished from its seemingly curved appearance, featuring a rounded front intake and circular headlamps, along with the manufacturer emblem seemingly taken from the XA-21. The bonnet has two vents around the front and opens to reveal a spare wheel with red straps on it.

The sides of the car are defined by the curved fenders and the flared arches, with the rear fenders having large ducts on either side of the wheels to allow air to pass through the rear brakes. The doors follow the shape from the front area and feature door handles at a lower height than most standard cars (being a bit higher than cars with gull-wing doors like the Stirling GT). The cabin features a T-bar roof and a large curved rear window that exposes the engine, as well as a smaller, square-shaped glass pane on the separation between the cabin and the engine bay. A small boot can be seen directly behind the engine bay area, along with a small manufacturer emblem just at the rear end of the car.

The rear area is notably curved in comparison to the front, featuring a set of red circular lamps with inner amber signals. There is a small inset area dedicated to the mounting of the license plate, as well as a central moulding for the exhaust tubes. The underside is very simplistic, with the outer sides enclosed by the bodywork.

The primary colour of the car is applied on the body and the lower interior area, while the secondary colour is applied on the headlamp housings. A trim colour is also available for the details of the interior, such as the steering wheel, the lower cage paddings and the backseat trims. It uses unique five-spoke rims with knock-off hubcaps, wrapped in low-profile tyres. 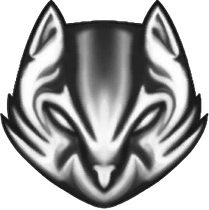 The Swinger is one of the fastest Sports Classics cars in the game. It possesses good acceleration and a high top speed. In terms of handling, it can be a handful on bumpy courses, and due to the lack of a spoiler, can get loose around corners, but it can be corrected. Overall, the car is a decent choice for circuits, and an excellent choice for drag racing.

The Swinger has 6 Advanced Flags activated[1], including the 4 flags introduced in the Southern San Andreas Super Sport Series update, with only the first three having known purposes. They are as follows:

The car is powered by a single-cam V12 engine sporting double-barrel carburetors on it, coupled to a 5-speed gearbox in a rear-mid engine, rear wheel drive layout. It shares the same engine sound as the Kuruma. 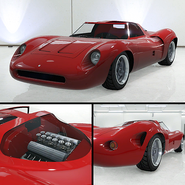 The Swinger on Legendary Motorsport.

The Swinger on the updated Rockstar Games Social Club.

The Swinger in the cinematic preview on Rockstar Games Social Club.

View of the spare wheel in the boot.