This article or section needs to be cleaned up to meet the standards of the GTA Wiki.
Grammar and restructure.

The Swing Glitch (also nicknamed the Car Cannon, Swingset of Death or Swingset Glitch) is one of the most famous and humorous glitches in Grand Theft Auto IV. It involves driving a vehicle into numerous swings around Liberty City, and the player's vehicle will be thrown by a great force.

There are several "glitched" swing sets around Liberty City and Alderney, most notably in Firefly Projects Park and Tudor near the Globe Oil gas station, both are accessible to cars and vans. Most of these are easy to access, specifically the two listed above, so it leaves sufficient space to allow the player to maneuver a decent-sized vehicle into position, the most popular method of exploiting the glitch.

If the player presses up against the swings in a vehicle it will often, with little to no warning, be flung an incredible distance through the air. It is not uncommon for flying vehicles to reach or even clear Outlook Park to the west, and Algonquin if done in Alderney. The end result of vehicular flight is almost always catastrophic body damage (often in a manner that is not easily achieved through normal crashes), although the engine will frequently still run. This enables the player to cruise away in their ruined vehicle.

The player risks being thrown out through the windshield upon launch, facing the vehicle towards the swing increases the likelihood of this happening. After being thrown out, the player may fall to their death. The likelihood of this is lessened if one is thrown to the east (where the player may land safely in water). However, it is nearly impossible for players to get launched through the windshield in multiplayer. It is recommended that the area of the vehicle containing the engine not touch the swing set, lest the engine catch fire.

The best swingset to use is the northern one, as using the southern one will almost always guarantee to crash into large apartment buildings. It is often also preferable to use the middle pole rather than the side ones. The Alderney swingset will usually result in you landing on the docks, but can also land you in the water or even in Algonquin.

It should be noted that achieving a successful launch that propels the player a significant distance is fairly difficult. For example, the Firefly Projects swingsets have the potential to fling the player into one of the fenced-off areas directly south of the swings, preventing the player from driving away with their chosen vehicle afterward.

As well as flinging vehicles, the swings have been known to hurl players, as well as unsuspecting pedestrians that hang from or brush against them. Although amusing, this will almost always result in their death, unless they are lucky enough to land in the water. Sometimes, when the swingset twitches, physically touching it will oftentimes just instantly kill the player, sometimes catapulting their body into the ocean or sky.

To get the most distance, back the rear of the car up to the middle pole then reverse. When the swing catapults you, you should go the furthest you can go (e.g. East Hook, this is one of the furthest locations the vehicle can land in).

The swingset can be useful for escaping the police, provided the player survives the landing.

If you try this with a helicopter it will lead to losing its blades and then blowing up. This happens 9 out of 10 times actually.

In The Ballad of Gay Tony's multiplayer (and singleplayer, too), the glitch is much less dangerous as the player can just bail out of their flying car and safely parachute back to the ground.

Most vehicles are capable of travelling some distance, but some will only yield good results infrequently. For example, the Ingot, Blista Compact, and Yankee can be launched as far as the Humboldt River under the right conditions, but such range is unpredictable and can be achieved only rarely. Other cars, such as the DF8-90, seem more responsive to the glitch and will give more regular results.

The vehicles that seem to give the maximum frequency of launch and distance of travel are as follows:

It is possible, although difficult, to use the glitch on a motorcycle, although it is unwise to attempt this owing to the massive likelihood of being flung from the bike, often with fatal results. It is also possible to exploit the glitch on foot, usually by jumping and hanging from the swings' crossbars, although this again carries with it a large element of risk - often the player will simply be launched directly into the floor at tremendous speed (fatal), and even if the player does become airborne, unless they are fortunate enough to land in the sea they will slam into the pavement or road upon their return to earth (also fatal).

Very rarely, players have been known to survive getting thrown from the swingset, usually by means of putting a car (preferably not a brute) underneath the swingset bars and having a player climb on top of the car and jumping over the bar, if timed correctly the player will usually be thrown in whatever direction they were jumping, and in some rare cases; will freeze in midair, do the standing up animation while floating to the ground and retaining full health, other cases cause the player and sometimes the car to be destroyed.

Larger vehicles are generally not good for exploiting the swing glitch as their increased weight limits the distance they can be thrown. However, if a Bus, APC, Yankee or a Benson is used on the swingsets, the vehicle may be launched underground into Blue Hell, often spinning wildly and uncontrollably until it respawns randomly on a road, usually somewhere near the swings. A further, rare glitch that only can be done in Broker will cause the vehicle to disappear entirely, leaving the player stuck in the nearby jungle gym while in the driving position.

Particularly wide vehicles like the Bullet are perfect for the glitch, as they have a much wider collision box for the swing to make contact with. The Bullet in particular is long, flat and wide, and so it is easy to keep it balanced up against the swing's legs totally diagonal to the ground.

The swing set can be used to obtain the "Rolled Over" achievement/trophy (a car must be rolled over 5 times in a row from one crash) as the swing set is capable of rolling a vehicle multiple times in mid-air, though it may take some time to achieve a suitably violent launch.

The glitch reappears in Grand Theft Auto V, albeit not involving a swing set. Instead, in Richman, opposite the Los Santos Golf Club, there are houses with automatic gates. Press upon any of these gates with your car from inside the property. The glitch physics will apply.

A variation of this glitch appears only in Grand Theft Auto Online as it requires two players to accomplish it. One player runs up to the wall where a normal gate is connected to and go into cover (R1 for Playstation 3; RB on Xbox 360). Logically, you should be squashed between the gate and the wall when the gate is opened. Once player one has done that, player two presses his car upon the gates. The presence of player one would make it harder for the gate to open. If done correctly, the glitch physics will apply with up to amplified effects as compared to the first glitch.

However, because of the revised gameplay physics of the game in contrast to Grand Theft Auto IV, the car will explode upon impact with the ground unless you managed to shoot high enough to reach the ocean or if you don't land upside down. 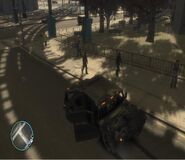 A Patriot after the Swing Glitch.

A pedestrian launched by the swing.