View source
watch 02:23
Wiki Targeted (Games)
Do you like this video?
Play Sound
“If swimming back and forth like a goldfish sounds like an excellent recreational and repetitive way to go mad, do we have a sport for you. Competitive swimming lets you face your greatest enemy - yourself - while fending off man-eating sharks and getting hit by drunks in motorboats.”

Player Interaction with Water Prior to San Andreas

Prior to GTA San Andreas, bodies of water were little more than lethal obstacles, which acted as boundaries to prevent players from reaching locked areas. In Grand Theft Auto and Grand Theft Auto 2, the player is instantaneously wasted when they fall into water, regardless of whether or not they are in a vehicle. Although this only applies to water that they have fallen into from a height, water that the player enters that is on their level allows them to paddle for a couple of seconds, which will drown them eventually if they don't get back out again (in Grand Theft Auto).

In Grand Theft Auto III and Grand Theft Auto: Vice City, falling or wading into deep water is still potentially lethal, as the protagonist will rapidly lose health if they wade more than chest-deep into water. There are boats in both games, though, now making the water cruisable.

In Grand Theft Auto: San Andreas, the player can float (in a water treading position), and swim in any deep body of water using directional controls. The player can perform a breaststroke to swim at a slow pace; holding the sprinting key/button allows the player to perform a faster front crawl. Tapping the sprint key/button rapidly adds slightly more speed.

Whenever the player enters water, a blue bar denoting the player's oxygen appears on the game's HUD, between the Health and Armor bars. When underwater or in a sinking vehicle, the bar will gradually deplete; when exhausted, the player's health will be reduced instead, leading to eventual drowning. The oxygen bar is replenished by returning to the surface of the water. The player's lung capacity determines how long the player can stay underwater, and is improved both by continuously diving and by collecting Oysters. The player can tread water and swim on the surface of the water indefinitely.

Diving allows the player to sneak past guards undetected in some missions, and can be used to explore the waters of San Andreas, revealing other secrets. In addition, the ability to swim allows the player to enter locked regions before they officially open, leading to a four-star wanted level in the process.

While Vice City Stories allows the player to swim, it only permits swimming for a limited amount of time, determined by a "stamina" bar which decreases as the player remains in the water. When the bar runs out, the player's health decreases, followed by drowning. This is to prevent the player from swimming across to still-locked areas. The player, however, can give Victor infinite stamina by beating the "Beach Patrol" side mission (by which time all regions of Vice City have been unlocked anyway).

Grand Theft Auto V includes an improvement in the diving feature introduced in San Andreas. The game includes a form of underwater diving known as scuba diving, which includes a full set of scuba gear, as well as a much more detailed oceanic environment. The player is able to dive into the water from platforms. Players can now use a knife underwater. They can also lose their wanted level by swimming deeper into the water's depths. Another form of swimming in the game is competitive swimming, where the player can compete with other swimmers for 1st place in a race. Additionally, treasure hunting via submarine was added as a side activity, as is harpoon or knife fishing. As in GTA: San Andreas, various underwater life can be found in the new oceanic environments, some of it being hazardous; tiger sharks in particular can be found in the sea, and can instantly kill the player with their bites.

In Grand Theft Auto Online, all the same mechanics are used for swimming.

Michael, diving into the water during the mission Daddy's Little Girl. 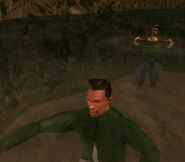 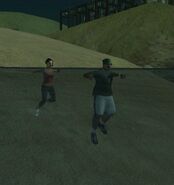 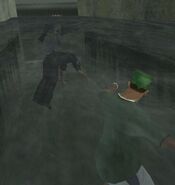 First Person diving in the enhanced version of GTA Online.
Polski
Community content is available under CC-BY-SA unless otherwise noted.