S_M_M_Gentransport Pilot
“You're not just buying a three-ton, nitro-charged, solid gold helicopter. You're not just subsidizing third world mining corporations, hysterical dictatorships, thousands of child laborers and dozens of NGOs pretending to fight human rights abuse. You're making a statement. You're making a statement about you, and the kind of meaningless decadence the world barely even notices anymore.”
— Elitás Travel description.

The Swift Deluxe is essentially a classic Swift with gold plating and black stripes on it, in the same color distribution as the aforementioned helicopter. The interior is fitted with luxury equipment, such as a TV screen, surround sound, tan leather seating and a coffee machine. Passengers can drink champagne and browse the internet within the helicopter, instead of using the Mobile Phone. The player can also hold down the "Enter Vehicle" button to enter the rear compartment. 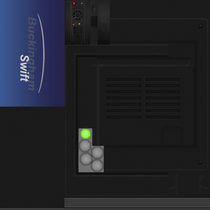 Apart from minor alterations to the statistics of the helicopter, it performs similar to the Swift. It is slightly weaker and susceptible to damage, but it is more agile and take-off speeds are quicker. Its top speed has been shifted down by 0.1 in the game files.

The Swift Deluxe cannot be modified at all, rendering it impossible to change the gold paint or the black stripes. The only option available is to remove the aircraft from the Hangar.

Promotional image of the Swift Deluxe. 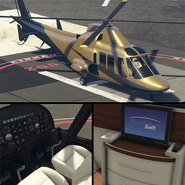 The Swift Deluxe on Elitás Travel

The Swift Deluxe on the updated Rockstar Games Social Club.

First Person Interior in the enhanced version of GTA V.

Interior of the Swift Deluxe.