GTA Wiki
Register
Don't have an account?
Sign In
Advertisement
in: Exclusive Enhanced Version Content in GTA Online, Vehicles, Vehicles in The Ballad of Gay Tony,
and 13 more
English

S_M_M_Gentransport Pilot
“Special edition lightweight, twin-engine, four-seat multi-purpose helicopter. For this collaboration with clothing and lifestyle brand Flying Bravo we've added rhodium stitching to the panda leather seats... and a couple of zeros to the price tag. There's no better way to sacrifice your pay check at the altar of luxury marketing.”
— Elitás Travel description.

The Swift is heavily based on the AgustaWestland AW109S Grand (undercarriage arrangement, slide doors, four-blade rotor and tail boom with a strike guard on the back), with some elements taken from the the Bell 222 (winglets on the tail, vents near the rotor and shapes on the upper side). The side engine intakes were borrowed from the Bell 430.

The Swift is considered a private shuttle helicopter with a long fuselage, which also makes use of marvellous aerodynamics, living up to its name. The aircraft has an angular nose with a relatively large cockpit, access doors for the pilot and copilot, and a nose landing gear. The main section features an open bay with relatively ample space (though unable to carry passengers), a tall engine compartment with a four-bladed main rotor and numerous intakes, along with side extensions that house the main landing gear and dual exhausts. The tail boom is slightly angled upwards and has small fins on the horizontal stabilizers, a four-bladed tail rotor on the right, and a strike guard on the lower vertical stabilizer. The interior features a small flight instrument panel with the corresponding control sticks and pedals.

The aircraft only spawns in a white primary colour for the fuselage and the tail boom, a secondary colour for the engine compartment, lower rear portion, part of the tail boom and the fins, and a blue pearlescent colour, together with a Santo Capro livery. It uses a set of industrial wheels derived from trucks such as the Benson, Mule and Phantom.

The Swift returns with the same design as in TBOGT, but it is re-elaborated in terms of details. It features a retractable landing gear system just like its real-life counterpart, and working taxi lamps on the side extensions. The windscreen and front door windows no longer have a light tint by default, and the bay doors have a sliding animation, along with additional seats that allow it to carry two more passengers. In the enhanced version, the instrument panel uses the "Flyer" dials derived from the Maverick and the Police Maverick, with a similar arrangement on both halves of the panel; the functional dials are located on the right side of both panel halves, as well as in the gauges on the left of the halves and on the rightmost side of the panel half. There are numerous blue displays on the upper side of the whole panel and the "Gear Up/Down" displays on the left-hand side. The red switches are also located on both side edges of the whole panel.

The Swift is available in two versions:

In terms of performance, the Swift is slightly faster and more maneuverable than other large helicopters, such as the Maverick. While it is not as fast and armed as the Annihilator or the Buzzard, the Swift makes up for it with its handling, which proves to be efficient when landing in a hurry, as well as having a decent take off speed.

The Swift is powered by twin turboshaft engines, which produce a similar sound to the Annihilator and the Skylift, albeit with slightly less intensity.

The Swift is one of the fastest and most maneuverable helicopters available, with a top speed of 150 knots (higher than the Buzzard Attack Chopper) and very fast acceleration. The helicopter is incredibly responsive to being able to quickly correct its flight path. The Swift can carry up to four players, with players in the back seats having access to assault rifles and light machine guns.

However, this comes at the expense of build quality. The Swift's armor is weak, making it just as vulnerable as other helicopters. While the pilot is relatively protected, the helicopter's engines will begin to fail after a small amount of gunfire, and it takes only one explosive round to destroy the Swift. For that reason, the Swift is best suited for transportation rather than combat. The Swift is also quite fragile, and it can sustain heavy damage such as severe deformation or engine damage during rough landings – parts such as the nose gear and even the tail also break off easily.

Again, the Swift is powered by twin turboshaft engines, which have a similar sound to standard helicopters like the Maverick and the Police Maverick.

Upon being converted into a personal aircraft, the classic Swift can be repainted with a primary colour and a secondary colour, The Flying Bravo variant, however, cannot be repainted due to the permanent green/red livery.

A Swift in The Ballad of Gay Tony with slide doors open.

A Swift in flight.

Luis in the Swift's bay.

Luis and Gay Tony in front of the Swift.

A Swift shown in the official artwork. 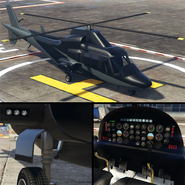 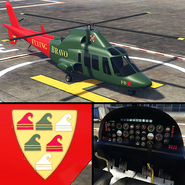 The Swift on the Rockstar Games Social Club.

The Swift on the updated Rockstar Games Social Club. Only the Flying Bravo variation can be seen on Social Club as of 2020.

The Swift in the cinematic preview on GTA V Rockstar Games Social Club.

The Swift in the cinematic preview on GTA Online Rockstar Games Social Club. 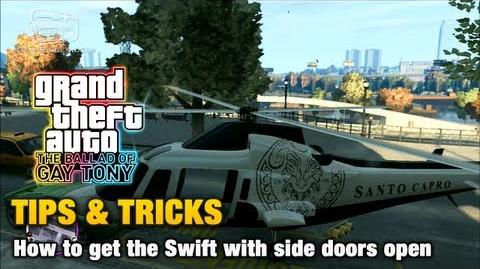 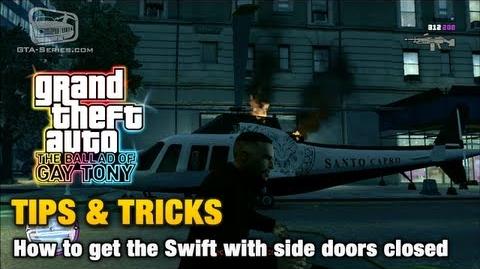 Swift with side doors closed

From the "Missions" menu on Luis' phone, choose the mission Caught with your Pants Down and meet Yusuf Amir at Star Junction. Get in his helicopter and fly to any GTA IV/TLAD/TBoGT safehouse and land the helicopter in the parking space. Immediately kill Amir and the player. The mission will fail, spawning Luis at the hospital. The Swift will now be at that current safehouse for you to obtain.

The player can also obtain the Swift with side doors closed by doing the club management mission featuring Bruce Spade. One can either complete the mission and keep the helicopter, or kill Bruce and fly away. The player have to take it to any parking space to save. The player cannot, however, redo club missions after they are completed, so it is only available at one point.

Swift with side doors open

From the "missions" menu on Luis' phone, select the mission ...Blog This! and meet Gay Tony at the helipad. Immediately, the player has to kill Tony and then The Celebinator (killing The Celebinator first will fail the mission and Tony will fly away). The mission will fail and the player will now have a Swift at their disposal. One have to save it at any parking space if they want to keep it.