"Carl, no time to chit chat! Been seeing a Seville Families bia. Word got out on the street and the boys don't like it. I'm pinned down in the Seville hood and we need a ride out of here, pronto!"
―Sweet Johnson

Sweet's Girl is a mission in Grand Theft Auto: San Andreas given to protagonist Carl Johnson by his brother Sweet from his house in Grove Street, Ganton, Los Santos.

Carl Johnson drops by his brother's house. Upon arrival, however, he realises that nobody is home. Carl walks out of the house and receives a phone call from Sweet. Sweet informs Carl that he has been ambushed by Seville Boulevard Families gang members while visiting his girlfriend in Playa del Seville, and that they have surrounded his girlfriend's flat. Carl arrives at Sweet's girlfriend's flat, where he discovers that they are being attacked by five gunmen, two of them are armed with Tec-9s and the other three are carrying 9mm pistols. Sweet is firing back with his own pistol, but his ammunition is depleting quickly, prompting Carl to resolve the situation by killing the gang members. After killing the gang members, Sweet phones Carl again and tells him to acquire a four-door vehicle to drive Sweet and his girlfriend home. Carl picks up both Sweet and his girlfriend, who are immediately chased by three Seville Boulevard Families gang cars. After fending off the pursuing gang members, Carl drives Sweet and his girlfriend back to Sweet's house, where Sweet pledges to end the "green on green" war.

The reward for completing this mission is an increase in respect. The mission Cesar Vialpando is also unlocked.

Store a four-door vehicle in Carl's garage before starting the mission. As soon as the opening cutscene ends, get in the car and drive to Playa Del Seville. Heavy weaponry and full Body Armour is recommended for this mission. After picking up Sweet and his girlfriend (a Greenwood is parked nearby for the player to use), two gang cars will gave chase to the trio. Ignore them and focus on driving back to Grove Street without damaging Carl's vehicle. 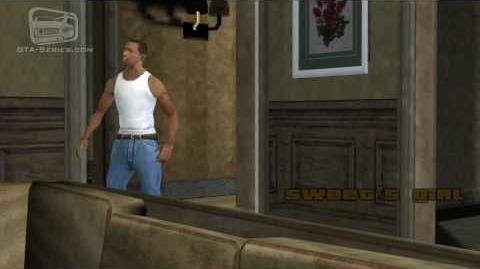 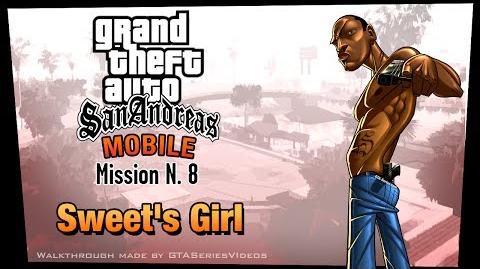 Retrieved from "https://gta.fandom.com/wiki/Sweet%27s_Girl?oldid=941429"
Community content is available under CC-BY-SA unless otherwise noted.