• ­Scope out the back entrance. (Michael)

• ­Drive to the airfield. (Trevor)

• ­Get in the helicopter. (Trevor)

• ­Search for the construction entrance. (Trevor)

• ­Hover near the construction entrance. (Trevor)

• ­Take Franklin back to his house. (Michael)

Bury the Hatchet
(Deep Inside must also be completed)

Surveying The Score is a mission in Grand Theft Auto V given to protagonists Trevor Philips, Michael De Santa, and Franklin Clinton by Lester Crest.

Trevor, Michael, and Franklin meet in Trevor's office in the Vanilla Unicorn. Soon, Lester arrives. They are there to plan the "Big One," the heist of the Union Depository. They decide that Michael and Franklin will survey the Union Depository Tower while Trevor and Lester will follow a pair of Securicars doing a practice run to the Depository. However, they must move quickly; they have a three hour window in which Michael and Franklin must complete their task while Trevor and Lester get to a helicopter and find the Securicars.

Michael and Franklin drive to the Tower and examine the Tower's front entrance and garage access. Both seem lightly guarded. Once their surveillance is complete, the player is shifted to Trevor, who is driving with Lester to Sandy Shores Airfield. There, they board Trevor's Frogger and fly towards Downtown Los Santos where they spot the Securicars moving west along Innocence Boulevard.

Trevor and Lester follow the Securicars as they navigate through downtown. Trevor suggests various places where the crew could attack the cars, but Lester rejects them all. Eventually, the Securicars pass through a tunnel beneath a skyscraper in Downtown. The Securicars remain out of sight for several moments. When they reappear, they enter the Union Depository through the garage entrance.

Having chosen the tunnel as the spot to hit the Securicars, Lester now wants to find an escape route. He asks Trevor to hover over the nearby excavation site for the Los Santos Transit metro tunnel. Once Trevor has positioned the helicopter, Lester investigates the area. This done, Trevor takes Lester back to the Airfield while Michael drives Franklin back to the latter's home. 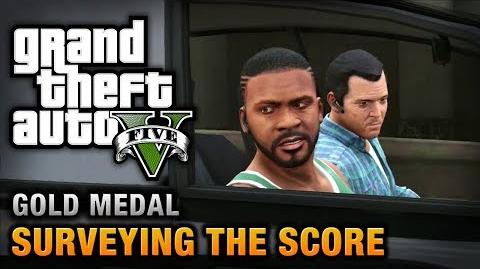 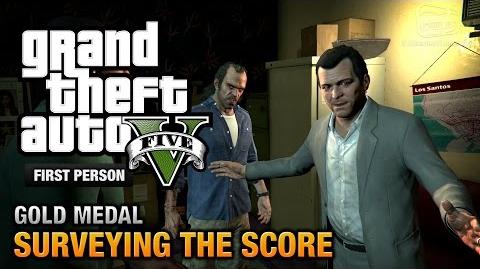 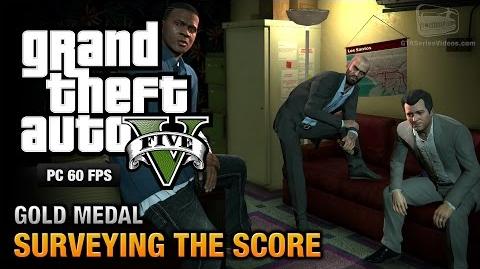 Retrieved from "https://gta.fandom.com/wiki/Surveying_the_Score?oldid=1245468"
Community content is available under CC-BY-SA unless otherwise noted.