Yes
“Take shit from your gas guzzling buddies, and spend hours at charging stations just to get mistaken for a rideshare driver. The Cheval Surge turns the zero emissions dream into a dull reality.”
— Southern San Andreas Super Autos description.

This car appears to be heavily influenced by the Chevrolet/Holden Volt hybrid sedan, while the front fascia bears a slight resemblance to that of the Honda Insight.

The front end of this car features a polymer-finished extender at the bottom, whose center is narrower than the outer portions and is about two-thirds of the car's width. On the upper area, there is a dominant chrome-finished central grille formation, which increases in width with height along the front. There is a blue light around both grille formations that is on once the car has been turned on, together with a central manufacturer emblem between the horizontal light strips. At the bottom of the formation there is a shallow, central vent which spans half the bumper width. Either side of this vent there are equally shallow vents, whose inner edges are parallel to the outer edge of the central formation. The headlamp units consist of inner circular lamps and various hexagonal lamps with a hexagonal shape and a bluish appearance, the latter forming a half-circumference that surrounds the amber indicators. The lower edges of the headlamp units coincide with the lower edge of the main grille, while the upper edges coincide with the top edge of the central formation and bear silver/chrome strips connected to the grille formations. The curves that form the edges for the bonnet/hood elevation run from a top corner of the formation to its corresponding corner of the windscreen.

On the sides, the car bears a flared profile around the wheel arches and prominent formations above the wheelbase line, which connect the fender flares of either side and have an upswept profile, leading towards the top of the rear fender flares, along with polymer-finished side skirts with small fins on the rearmost edges. Additional smooth accent lines are seen slightly above, starting from the front fenders and almost reaching the outermost edges of the tail lamp housings, also passing through the painted door handles. The silver/chrome strips from the front end continue from above the headlamp housings and pass through the waist line, before eventually leading to the drip line and ending near the wing mirrors, almost surrounding the side windows of the glasshouse area. The same glasshouse area features polymer-finished sections around the windows and small wing mirrors with painted upper halves that are located near the A-pillars, while the roof mostly consists of glass panes and polymer-finished separations. The trunk hatch is located on the rear and pivots from the rearmost separation of the roof.

The rear end of this car features a protruding lip spoiler on the upper border of the trunk lid, which curves from almost the uppermost edges of the tail lamp housings, while a silver/chrome strip runs from the lower edges of the tail lamp housings, which curves downwards to follow the shape of the rear bumper and becomes thinner in appearance. A polymer-finished section is located between the innermost edges on the tail lamp housings that bears the manufacturer emblem on the center, while the silver manufacturer lettering is located just below the same section. The tail lamp housings consist of two circular red lamps and various smaller hexagonal lamps that follow the upper and side edges of the housings, where only the inner circular lamps work as the brake lamps, while the outer circular lamps and the smaller lamps work as the main lamp. The rear bumper adopts horizontal formations around the middle and is fitted with red long strips just below these formations that work in conjuction with the engine, while the center bears a dedicated section for the license plate and a silver/chrome outline on the surrounding. The bottom of the rear also features a silver/chrome strip that separates the bumper from the polymer-finished extension, with the latter housing a single square-shaped reverse lamp in the center.

The interior of the car is somewhat comparable to the Dilettante, having relatively ample room and a small dial cluster. In the enhanced version, it shares the same dial set as cars like the Schafter and the Tailgater.

The Surge is only painted with a single primary colour, which also affects the interior stitching. It uses the same rim design as the Bullet.

The Surge has a decent top speed, thanks to the powerful electric motor powering the front wheels. Since it has no transmission, the electric motor directly drives the wheels, which results in a very quick throttle response, allowing the Surge to accelerate much more quickly than other cars. Although technically not considered a performance car, the vehicle has excellent on-road handling, and its good weight distribution and suspension allows it to take corners without spinning out of control, although understeer may become an issue at higher speeds. The only downside to this car is its mediocre durability; the Surge can withstand very few hits before its wheels lock up.

Even though it is an electric car, the Surge can still explode on impact if falling from a certain height, just like a regular car. This implies that the Surge uses either a lithium-polymer battery or a fuel cell, both of which could catch fire and explode if severely damaged in real life.

Like the Dilettante, the Surge will run quietly until its speed is high. What looks like a V8 engine cover is seen on the front. 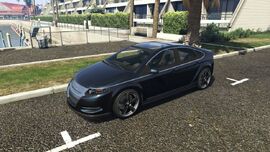 The Surge on the updated Rockstar Games Social Club. 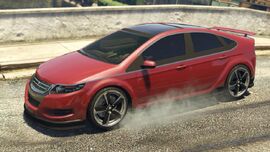 The Surge in the cinematic preview on Rockstar Games Social Club. 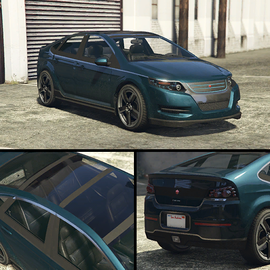