GTA Wiki
Register
Don't have an account?
Sign In
Advertisement
in: Pages with non-numeric formatnum arguments, Articles with section stubs, Vehicles,
and 7 more

surfer
surfer2
For a similar looking van in Grand Theft Auto: San Andreas, see Camper.
“If you're looking to bang freshmen, haul surfboards, or run weed across the border, this is the camper for you. Membership to an elite group of dropouts, degenerates and dudes stuck in the past is only a few thousand bucks away.”
— Southern San Andreas Super Autos description.

The van is depicted with a seemingly wide bodywork and relatively short wheelbase, similar to the Grand Theft Auto: London rendition. The front end of the van is rather curved and features a small chrome bumper, fitted with a small guard and a license plate on the centre. Slightly above the bumper, there are dual chrome sections housing dual circular headlamps, with the inner ones placed further to the front than the outer ones, while the BF logo can be seen on the centre. Around the middle section, there are additional amber indicators with chrome detail around, while the upper area is occupied by the dual windscreen, the chrome rear-view mirrors and the black wipers mounted on the outer-lower sections below each windscreen glass.

On the sides, the vehicle assumes a more simplistic profile, featuring a slightly flared profile on the rear arches. The doors are relatively large and feature chrome door handles, while the rear section has black door railings and vented sections for the engine. On the cabin area, the vehicle uses large rectangular windows and square-shaped windows on the portions beside the rear doors, as well as small inner separations on the front door windows.

On the rear end, the vehicle features a large upper compartment door with a rectangular window on the upper half and a small chrome handle at the bottom, as well as a second compartment door apparently intended for the engine (though not visible when open), having a chrome handle and the badges at the bottom. Beside the engine compartment, there are chrome vertical sections housing circular tail lamps, with the upper ones being the main/brake lamps and the lower ones the indicators. The area below the lower compartment is occupied by the central license plate just below it, as well as the small chrome bumper at the bottom. A single exhaust tube can be seen on the driver side, just below the bumper.

The Surfer may spawn with an optional roof rack and, sometimes, a surfboard mounted on the same. In the enhanced version, the interior and dial set are similar to those used on vehicles like the first generation Burrito and the Boxville.

The Surfer is one of a few cars in that can be found as a beater - a rusted out version of the original car that has a worn bodywork, rusted out textures over the chrome parts and slightly deformed license plates. The front indicators are white instead of amber (possibly worn-out), while the rear license plate is mounted directly to the bumper. In the enhanced version, the vehicle has a worn-out interior and dial set derived from the Journey.

On the clean variant, the stripes on the front end and the sides, the cabin area, the door hinges and the engine bay are painted with the primary colour, while the body is painted with the secondary colour. On the beater variant, however, the colour distribution is swapped (primary on the body, secondary on the cabin, stripes and engine compartment), and the door hinges remain the same, due to the worn textures. The clean variant uses five-spoke aftermarket rims with similar details to the "Muscle Freak" muscle wheels, while the beater variant uses plain rims similar to the "Classic Rod" wheels, albeit with a silver protruding centre.

The Surfer is very slow due to its small engine. However, acceleration is not that bad, and handling is average, but overall, it is sluggish and is not a good choice for pursuits due to its weak resistance against heavy collisions and struggles to evade cars that gets in the way. The beater variant has higher ground clearance compared to the clean one, making it a good vehicle on bumpy, flat terrain. However, it is significantly inferior in terms of overall performance.

Both variants of the Surfer have a small engine on the rear that powers the rear wheels through a 4-speed gearbox. The engine sound is the same used on the Injection and the Dune Buggy, although it does not rev as high as the aforementioned vehicles, likely due to the limited engine power.

The Surfer, as it is seen in Righteous Slaughter 7. 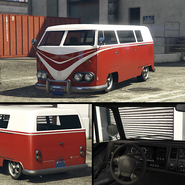 The Surfer on the updated Rockstar Games Social Club.

The Surfer in the cinematic preview on GTA V Rockstar Games Social Club.

The Surfer in the cinematic preview on GTA Online Rockstar Games Social Club.

The beater Surfer on the updated Rockstar Games Social Club. 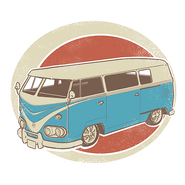 A Surfer Graphic for a tee in Grand Theft Auto Online.

This section contains insufficient information and is considered as a Section stub. You can help the GTA Wiki by expanding it as much as you can.
Requiring improvement: Details of the NPC-modified Surfer.

An NPC-modified Surfer near the Del Perro Beach.

An NPC-modified Surfer in North Chumash. 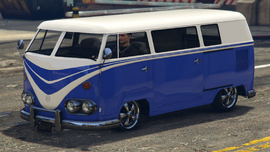