View source
watch 02:34
Fire Emblem Warriors: Three Hopes - The Loop
Do you like this video?
Play Sound
Not to be confused with the Serrano, an SUV with a similar name featured in TBoGT and GTA V.

“This is luxury reasserted. Right in your neighbour's face. Boom. You like that. That's right, you are better than him, and you could have his wife if you wanted. Try it on with her as soon as she sees this ride. You'll be a double benefactor.”
— Southern San Andreas Super Autos description.

The main body of the roadster, bonnet/hood, contour of the sides, greenhouse area, and boot/trunk is inspired by the Mercedes Benz SLS AMG Roadster. The front bumper, headlights, grille, air intakes, taillights, rear bumper, and exhausts are derived from the Jaguar F-Type. There are some elements of the Maserati GranTurismo found in the Surano as well, being the three small vents on the front side panel as well as the large but shallow side vent that looks to be a taller version of the ones found on the GranTurismo MC Stradale. The headlights of the Surano also resemble the headlights found on the Jaguar F-Type and 2013–2017 SRT Viper.

The front face of the car features a bumper with a seemingly flat shape and a CFRP insert, spanning the central two-thirds of the car's width. Above this, the most dominant feature of the car's front face is a large central grille, having a chrome finish around and a thick horizontal strip at mid-height, followed by dual vertical intakes on either side intended to cool off the front brakes. At the front of the two elevated areas of the bonnet/hood there are black headlamp housings that have LED strips as a contour to the outer edge and then a single circular lamp inset, while the bonnet has the Benefactor emblem mounted centrally between the two circular lamps and dual intakes on either side, near the windscreen.

The sides of the car are fairly simple; the wheelbase features side skirts that form a peak at the rear wheel arch. The front quarter features an impressed section, upon which there are three chrome quadrilateral-shaped ducts with an horizontal chrome stripe running through them at half their height. The main body line is fully straight and is level with the face of the wheel arch bulges. The wing mirrors are half polymer and half body-coloured metal, placed just behind the base of the A-pillars. On the greenhouse/glasshouse area, the car has body-coloured portions around the windscreen, while the rest is occupied by a black retractable roof with a fairly simple mechanism, where it slides to the rear area and keeps the front section leveled to later fold down and cover most of the portion behind the seats. The car also has a small boot compartment.

The rear face of the car consist of an inset section on the boot lid holding the license plate, together with the Benefactor emblem mounted centrally and the "SURANO" badging on the passenger side, above the license plate. The outer sides of the car house a set of red tail lamps, consisting of large main units spanning up to the rear quarters of the car, rounded brake lamps and smaller main units on the innermost sides. The bumper area slightly protrudes from the rest and house a black diffuser with a carbon-fibre bottom and centre, along with large sections housing dual-exit, dual exhausts. The interior of the car is similar to cars like the 9F Cabrio and the convertible variant of the Rapid GT, which in the enhanced version, share the "Super GT" dial set and textures.

The car only has a primary colour, which is applied on the bodywork and the interior stitching. The car runs on split six-spoke wheels that are also shared with the second generation Baller, wrapped in low profile tyres.

The Surano is very quick on the throttle and has a competitively high top speed. However, the vehicle's steering together with its bulky size can result in oversteer, often making it hard to control.

The Surano uses an engine cover that is similar to a typical single-cam V8, coupled to a 6-speed gearbox in a front engine, rear wheel drive layout. It shares its engine sound with cars like the Tailgater, the Sentinel and the FQ 2.

A Surano with the convertible roof up in GTA V. (Rear quarter view)

An NPC-modified Surano in the enhanced edition of GTA V. (rear quarter view)

An NPC-modified Surano in the enhanced edition of GTA V. (rear quarter view)

The logo as shown on the TV commercial. 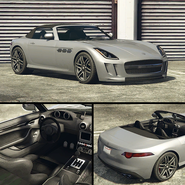 The Surano on the updated Rockstar Games Social Club.

The Surano in the cinematic preview on GTA V Rockstar Games Social Club.

The Surano in the cinematic preview on GTA Online Rockstar Games Social Club.

Pre-modified variants of the Surano can be seen driving around Vinewood Hills randomly. 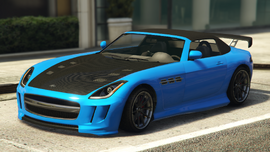 Like the randomly spawning modified Jesters, two sets of Suranos may spawn outside Los Santos Customs, or around the city, pre-modified. These again only spawn in single player. The vehicles appear in set color sets with the same modifications. They will not spawn with any of the default extra components. These variants are named "LS_CUSTOMS_MODDED_SP" and use the exact same modifications and colors as the Vinewood Hills Modded Surano set. 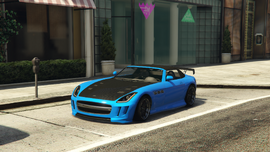 It also appears in an unused model set, "ROCKFORD_CARS" where it would have spawned, among other high end cars including the Voltic and Cheetah, driving in and out of driveways.