The soccer team is very likely Russian due to it featuring a red star and a colour scheme similar to the flag of the Soviet Union. The team is sponsored by the Russian music radio Vladivostok FM from Grand Theft Auto IV.

The team could likely be based on PFC CSKA Moscow, due to similar logos.

"The Tracker" of the Los Santos Triads wears a black cap with the Superstroika logo on it. Polo shirts with the teams colours can be purchased in Grand Theft Auto Online. 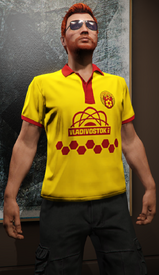 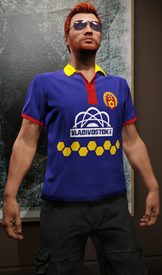 Superstroika Dark Polo Shirt.
Add a photo to this gallery

Retrieved from "https://gta.fandom.com/wiki/Superstroika?oldid=1225124"
Community content is available under CC-BY-SA unless otherwise noted.