Standard White - 100%
“Synonymous with style and luxury, the interior of Super Diamond has so much leather and wood, it's like sitting in a library. The historic British car manufacturer was taken over by the Germans in the late 90s, with no hard feelings whatsoever.”
— Legendary Motorsport description.

The Super Diamond is intended to resemble a 2003-2017 Rolls-Royce Phantom, with some small elements from the 1968-1991 Rolls-Royce Phantom VI, although the car appears to be a lot less regal in construction, with various slight changes, such as the front wheels being shifted slightly forwards and unlike its real-life counterpart, the Super Diamond does not have rear suicide doors. The car also slightly resembles a 2006 Chrysler Imperial, most notably in the headlights. Coincidentally, the Imperial can be described as a Rolls-Royce clone by certain styling cues.

The Super Diamond features a rather boxy design with luxury features and ample room. In the front fascia, the car sports a large 10 element rectangular grille finished in chrome. On the top of the grille is a sculpture meant to replicate the Spirit of Ecstasy bonnet ornament found mounted on the grille of many Rolls-Royce cars. From the grille, the initial bonnet is raised with chrome lining representing this clear bulge; these lines run diagonally along the bonnet to the A-pillars of the car. The Super Diamond has square headlamp units with twin circular main beams. Underneath the units are the LED indicator strips matching the width of the headlamp units. Under the grille, three air flow grilles are found, with the center matching the width of the initial radiator cooling grille. These are fitted with a mesh pattern unlike the main grille. The license plate is mounted directly in the center.

The side of the vehicle allows the chrome line from the bonnet to proceed to the very last pillar of the car where it meets with a small window channel. Being a luxury 4-door saloon, the car sports a long wheelbase, and as such offers a large amount of room for passengers. As a result of the wheelbase, the side profiling features large windows. The vehicle sports a chrome B-pillar along with the chrome finishing around the window channels.

In the rear fascia, the vehicle sports a large boot with an additional un-retracted aerial found to the right hand side of the boot. The boot itself features a chrome panel, possibly acting as a handle, directly above the license plate which is recessed. Like the front headlamps, the rear lights consist of the unit with twin circular lights. Underneath, again, are the LED indicator strips. At the base of the car are the twin-exit square exhaust tips.

The car features an interior similar to the Schafter's, but is covered by tan leather and has no logo on the steering wheel. Super Diamonds are seen in a variety of single colours, and uses a set of wheels identical to the ones of the Oracle.

The Super Diamond is equipped with a GPS system with a female voice, but only if the player leaves the "selected cars" (default) option in the audio menu.

Returning to Grand Theft Auto V, the car retains its original luxury style and brown leather interior, thus remains to be based on the Rolls-Royce Phantom. In the enhanced version, however, it gains a restored interior, sporting a luxury beige leather finish based on the one used in the Schafter and the Tailgater, also found on the Carbonizzare.

Again, the car can spawn with a variety of primary colours for the body and the stitches on the interior. It also uses six-spoke alloy rims with medium-profile tyres.

The Super Diamond has a considerable top speed, and is also capable of accelerating rather fast considering its weight. The handling is fairly good for a vehicle when taking short turns. Longer turns will result in the car starting to drift, and its continuation will eventually result in the car spinning out of control. Crash deformation is good, lasting for about 3 to 4 direct hits before the vehicle starts to smoke or ignites. Overall body and engine integrity is on par with the Schafter or Dukes (car). Braking while turning will often lead to understeer, then possible oversteer. However, unlike the vast majority of vehicles in GTA IV, the Super Diamond in The Ballad of Gay Tony lacks the characteristics of an anti-lock braking system; under braking power at high speeds, steering the vehicle has no effect, unlike where many other cars would gradually steer to the left/right when steering under braking. This also applies to its Drop variant.

The Super Diamond has a modeled twin-cam turbocharged inline-4 engine, which powers the rear wheels in an FR drivetrain layout and a 6-speed gearbox configuration. Its engine sound is generally smooth and low-revving like most luxury cars such as the Admiral and the Cognoscenti. However, its has a unique engine tone, also shared with the Drop variant.

The Super Diamond is a powerful car, with very high acceleration and top speed for the class. It is very good in a straight line, to such a point it challenges some Sports cars in drag races. However, the Super Diamond's massive weight and long wheelbase provides for a very lethargic, understeer-heavy car. This is only worsened by being in a class which has very good handling standard, that makes the Super Diamond vastly inferior to most other Sedans from a practical standpoint. Braking is meager because of its heavy weight. Crash deformation is remarkably strong, and can take several direct hits without failing or causing the wheels to camber negatively. The Super Diamond's gearbox is somewhat downgraded from its previous rendition, becoming only a 5-speed gearbox, lacking the 6th gear available in TBoGT. Still, the bulk and weight of the Super Diamond is strong enough to detach the wheels of other cars upon impact.

In the previous gen version, the Super Diamond shares its engine sound with the Oracle, Oracle XS, Schwartzer, and Intruder, while in the enhanced version, the engine sound is shared with the FQ 2 and Surano. It sounds rather flat and underpowered, yet actually delivers a great amount of power to what is a very heavy vehicle. However, this is consistent with its body design, as Rolls-Royce makes vehicles that, for the sake of luxury, are famously quiet even at high speeds and high engine loads.

Interior in the original versions.

The Super Diamond on the updated Rockstar Games Social Club. 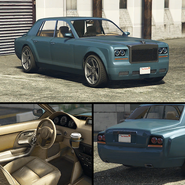 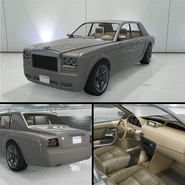 The Super Diamond on Legendary Motorsport.

The lawyer's Super Diamond in the Protagonist's Agency Garage.

Modified Super Diamonds may spawn with specific colors and custom High End "Split Ten" rims, as well as with unique window tint. It occasionally spawns at Los Santos Golf Club in both Grand Theft Auto V and Grand Theft Auto Online. It will always spawn in the same parking spot. As there are three variants, there is a 1 in 3 chance of each variant spawning.

The vehicle can spawn at any time of day. The player can seed the other variants to spawn if they are already driving one of the variants.

The Super Diamond only begins to spawn in traffic after completing all of the storyline missions. It still is in fact a very rare sight, but tends to spawns in a select few places: