Unknown
Not to be confused with Sunny, an electronics company in Grand Theft Auto: San Andreas.

Sunny is a veteran member of the Varrios Los Aztecas gang who, along with Hazer and Gal, helps Carl Johnson and Cesar Vialpando take control of the El Corona district of Los Santos from the Los Santos Vagos. He is also injured in the mission. One oddity in his lines is that he mentions he's going to cut a few Vagos, even though Hazer has a Katana and he has a TEC-9. When he whips out the RPG, he will fire a few rounds at the enemies, but when Vagos appear behind you, he gets shot, but sits by the car bleeding and breathing heavily. 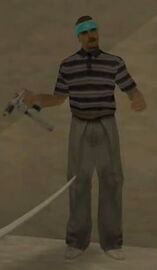