The Sumo brand is most notable as the manufacturer of Claude's Sumo Wordman pager in GTA III, but can also be spotted in multiple locations in the aforementioned games. The company's slogan is "The Industry Heavyweight".

Sumo billboards are present in GTA III in Staunton Island and Shoreside Vale. In addition, the Sumo logo can be found on certain Yankee trucks in GTA III and use Bensons in GTA Vice City. In GTA San Andreas, Sumo is known to operate in a building at the LVA Freight Depot in Las Venturas, San Andreas, and Sumo sponsorship stickers are also present on Hotring Racers cars. Sumo cameras are advertised on the Starland Camera Centre store on Vinewood Boulevard, Market, Los Santos.

Sumo reappears in Grand Theft Auto IV, sharing a store with Panoramic in Berchem and in Hove Beach.

In Grand Theft Auto Online, the company's banners can be found in Benny's Original Motor Works, suggesting the company also specializes in car parts. Looted Sumo headphones can also be stored and sold by organizations.

Description on the side of headphone boxes. 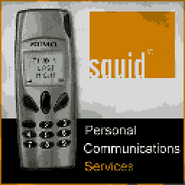 A Sumo mobile phone on a Squid billboard advertising in GTA III.

Sumo banner inside Benny's Original Motor Works.
Add a photo to this gallery

Retrieved from "https://gta.fandom.com/wiki/Sumo?oldid=1173407"
Community content is available under CC-BY-SA unless otherwise noted.