The logo of Sum Yung Gai

Huang Lee's uncle Wu "Kenny" Lee does his business here, and the player's first missions from him are received here.

The restaurant is unique for having a giant bowl sculpture on its roof with a body armor pickup inside it. The restaurant is a destination for Taxi Driver in Grand Theft Auto: Chinatown Wars. The business name appears on some Pony vans.

A sticker of the restaurant's logo was included with other stickers of Huang, Ling, the Burger Shot logo and the Rockstar Games logo if GTA Chinatown Wars was pre-ordered (Australia and New Zealand).

Sum Yung Gai's building design is based on the real-life Chao Zhou Restaurant at 40-52 Main Street, in Flushing, Queens, which is most notable for its signature red bowl and chopstick sculpture on its roof; the restaurant is based in the first floor, while the second floor is occupied by a karaoke "KTV MONSTER" lounge (The "MEN STORE" sign on the building in-game is derivative of the "MONSTER" sign of the real-life karaoke lounge).

The restaurant's Pony in GTA IV. 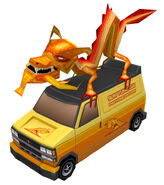 The real-life Chao Zhou Restaurant (left) circa November 2009, which the Sum Yung Gai building's design is evidently based off.

Sum Yung Gai in GTA Chinatown Wars.
Add a photo to this gallery

Retrieved from "https://gta.fandom.com/wiki/Sum_Yung_Gai?oldid=1247813"
Community content is available under CC-BY-SA unless otherwise noted.