Standard White - 100%
“You might think the Sultan RS Classic is the perfect car for that Auntie your parents stopped inviting to Christmas. And it turns out that's true, because your parents suck, and your aunt sneaks out at the weekend to co-run legendary rally championships and stack-out her Hornbills loyalty card. Time to take after the wrong side of the family...”

The Karin Sultan RS Classic is a 2-door sports sedan featured in Grand Theft Auto Online as part of the continuation of the Los Santos Tuners update.

The Sultan RS Classic is based on the coupe version of the first-generation Subaru Impreza.

The vehicle acts as a classic predecessor of the original Sultan RS, similar to how the Sultan Classic acted as the predecessor of the Sultan and is essentially just a two-door version of the Sultan Classic with the same design and features, albeit with the addition of a widebody kit. Its interior is the same one from the Sultan RS, the Remus and the Elegy Retro Custom, but featuring the Karin logo on the horn cap, similar to the four-door variation. The interior can be also modified to feature additional analog gauges, digital displays and numerous switches, in a similar manner to race-type cars such as the RE-7B and the ETR1.

Like the regular version, the vehicle's bodywork, engine cover and interior stitching are painted in a primary colour, while the mirror wings are painted in secondary. A trim colour is also available for part of the interior, as well as a dial colour. The stock wheels are identical to the ones from the regular version, being identical to the "Apex" tuner wheels seen in Los Santos Customs, wrapped in low-profile tyres.

Like the four-door variant, the Sultan RS Classic is powered by a 6-cylinder, twin-cam engine fitted with twin turbochargers, stated to be a 3.5L engine. Said engine is also coupled to a 5-speed gearbox and powers all four wheels, albeit with a torque distribution of 40% to the front and 60% to the rear (different to the four-door variant or its modern counterpart, but identical to the regular Sultan). Its engine sound is identical to the one from its four-door variant, being similar to that of its modern iteration, with a slightly different pitch.

Overall, its handling and speed are comparable with the Sultan Classic, having the same competitive prowess in racing, both on and off-road, with its tight turning radius, 4WD capability, and excellent acceleration. 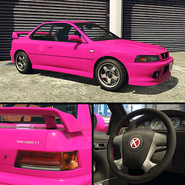 The Sultan RS Classic in the cinematic preview on Rockstar Games Social Club.