“For a wide-eyed junior exec in the late 90s nothing said "I can almost afford to buy European" like the Karin Sultan. These days you're an angry middle aged, pre-diabetic, wannabe rally driver, but the Sultan is still your best friend: with your money and our expertise, this could become the high-octane racer you dreamed of as a teenager and still have no idea how to drive. Eligible for customization at Benny's Original Motor Works.”

The Sultan was also supposed to appear in Grand Theft Auto: Liberty City Stories, but it was cut for unknown reasons.

The Sultan is distinguished by its basic profile as with various sedans in the game, yet it has a sportier appearance, with a sports bumper having two square intakes, a bonnet scoop, custom skirts and twin exhausts. It also has 5-spoke rims with a pentagon-shaped centre.

Now manufactured by Karin, the Grand Theft Auto IV Sultan draws upon the Japanese import styling of the previous Sultan. Its general body shape is partly based on the first-generation Lexus IS (Toyota Altezza), but its prevalence of sharper characteristics lends it a much more striking form. Certain elements such as the rear lamp units are inspired by the Mitsubishi Lancer Evolution V. Other elements (such as the bonnet and spoiler of the Korean Mob variant) bear resemblance to the Mitsubishi Lancer Evolution VI. Interestingly, ordinary Sultans come with blued exhaust tips, similar to the titanium tips on the Futo GT.

The Sultan is equipped with a GPS system with a male voice, but only if the player leaves the "selected cars" (default) option in the audio menu.

The Sultan's body is resembled as a Mitsubishi Lancer Evo VIII. Compared to other GTA games, the Sultan carries the Sultan RS's speed, and spoiler from GTA IV.

The Sultan reappears in GTA V, mostly unchanged in terms of appearance. The only difference is that its colour distribution changed, as the secondary colour is applied on the bonnet, roof and boot, as well as on the sides in the form of thin stripes. Its interior is also decorated with stitching on the seats and steering wheel, which matches with the primary colour. The car features black wheels by default (which actually gives a darker tone).

The Sultan has a small, yet powerful turbocharged engine, and a four wheel drive drivetrain. Its performance is relatively strong in comparison with all of the sports coupés and super-cars in the game, whilst its grippy four wheel drive system makes it particularly controllable; it is less prone to spinning out than the rear wheel drive cars, making it a good car for Gymkhana or cross-country road trip. The Sultan is the fastest four-door car in the game.

Much like its real-life counterpart, the Sultan makes for an excellent offroad vehicle as well. Its low ground clearance can be an hinderance offroad, but this can be rectified by adding Hydraulics. The only drawback of the Sultan is its poor build quality. The Sultan's front or back can be deformed even in low speed collisions with other vehicles.

Players favor the Sultan for drive-by attacks, due to its four seat capacity and its ability to outrun rival gang or police vehicles, as it has supreme handling.

The Sultan remains fast, grippy, engaging and easy to drive. Like all past Sultan models (and most Subarus) the GTA IV Sultan is AWD (40% front/ 60% rear torque distribution), providing superior traction and handling over other cars of the same class. While many similarly sized sedans offer similar straight line performance, the added stability of the Sultan allows fast cornering and easy power sliding, making it a good choice for races or getaways (and one of the best 4-door cars in the game). The soft suspension makes it roll over easily when turning. Under-steer is a factor, but the powerful engine and quick handling make it sporty and fun to drive. Although the engine is not the most durable, considering its speed, body deformation is average. Non-tuned Sultans come with alarms, the most popular forms being the horn and beep versions.

The Sultan in similarity to GTA IV carries the same speed and steering, but mostly based of traits from the Sultan RS. Also compared to other sedans, the Sultan can do burnouts more easily.

Returning to Grand Theft Auto V, the car remains one of the best 4-door cars in the game. It is a very good all-around car with above-average speed, acceleration, traction and handling and because of its AWD nature, the Sultan can easily surpass most off-road vehicles, especially when upgraded. The car suffers from a small amount of understeer when taking corners at high speed. Its durability is average. Braking, however, is this vehicle's weakness, taking a long time to slow or fully stop the vehicle. Additionally, the car does not handle particularly well when braking through a corner.

The Sultan is an extremely close competitor to the Kuruma, being able to compete very closely with one in a race (though both are rather off the pace in the sports class as a whole).

The engine is modeled as a twin-cam inline-6. With the "Roll Cage and Chassis Upgrade" modification installed, two turbochargers are fitted on one side of the engine.

Being classified as a "tuner" car, the Sultan can only be modified at Wheel Arch Angels; and like all cars of its class, the range of body kits, rims and spoilers are the same, the only distinction being its three unique customized body paint schemes. 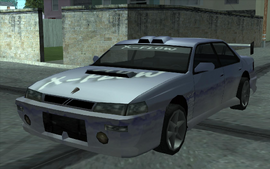 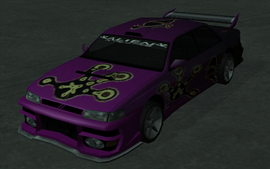 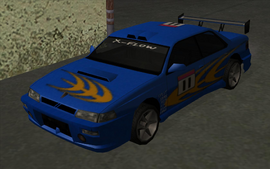 It is interesting to note that while Paintjob 1 and Paintjob 3 of the customized body paint schemes are of original designs, Paintjob 2 is a blue and yellow rally-like scheme similar to that of the Subaru World Rally Team's 1993-1996 Subaru Impreza GC.

The twin turbochargers seen on the Sultan with the "Roll Cage and Chassis Upgrade" modification.

The Sultan on the updated Rockstar Games Social Club.

The Sultan in the cinematic preview on GTA V Rockstar Games Social Club.

The Sultan in the cinematic preview on GTA Online Rockstar Games Social Club. 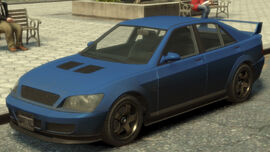 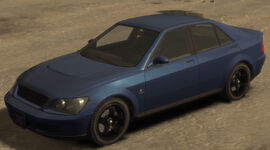 The Sultan requested in Stevie's Car Thefts in GTA IV. 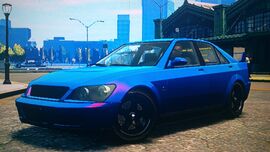 One possible combination that can be obtained from Drug Wars. (rear quarter view)

This section contains insufficient information and is considered as a Section stub. You can help the GTA Wiki by expanding it as much as you can.
Requiring improvement: Locations section