Standard White - 100%
“How do you let people know you're interesting and exciting without engaging in conversation, or even making eye contact? The Dinka Sugoi has as much finish and flash as the elaborate mating ritual of a bird of paradise. Just paint it bright, beam the lights and powerslide your way round town to lure the admiration and friendship that you alone could not.”
— Southern San Andreas Super Autos description.

The Dinka Sugoi (Japanese: スゴイ, lit. "Great") is a five-door hatchback featured in Grand Theft Auto Online as part of the continuation of the The Diamond Casino Heist update, released on February 13, 2020, during the Valentine's Day 2020 event.

The Sugoi was initially featured as a mission-only vehicle in the "Getaway Vehicles" preparation and later used as a possible getaway vehicle in the Casino Heist. However, as of the Valentine's Day 2020 event, it became available for purchase.

The Sugoi is based on the Honda Civic Type R FK8, with a lot of influence taken from the fourth generation Subaru WRX STI as seen in the bonnet, front bumper, and side view. The shape of the tail lights seems to be reminiscent of the second generation Chevrolet Volt.

The Sugoi is distinguished by featuring sporty elements and aggressive looks in a rather conventional design, having a black splitter at the bottom with small fins on the outer edges, and a set of mesh intakes above, with the outer ones having horizontal separations with light strips on them. The grille and headlamp arrangement on the upper area gives the car a strong similarity to the Jester (a sportscar also manufactured by Dinka) and has a black detail surrounding them, with the manufacturer emblem on the centre of the grille. The bonnet has a wide intake and opens to reveal the engine bay with a black detail around it.

The sides of the car have concave formations running through the lower sides and a set of black skirts, which have a coloured detail across the whole component and small fins on the rearmost portions, as well as vertical exit vents just beside the front doors. The wheel arches are generally wide with a flat around the wheel, with the rear ones slightly protruding from the rest of the car. The cabin area has black window trim and inner pillars and coloured mirror wings mounted near the A-pillars, which have a black horizontal detail on them. The roof features a single vortex generator and two black strips separating the same roof panel from the rest of the car.

On the rear end, the boot is relatively bulky and features a lip spoiler on top, along with the central license plate on the dedicated section and the Dinka emblem above the plate. Said boot has a large compartment that opens to reveal a black luggage cover. A set of stylised C-shaped tail lights can be seen on the outer sides, with the turning signals and reverse lights located in a triangle shape. On the lower area, the rear bumper extends a bit further and features a set of rear exit vents on either side, as well as a black section encompassing the lower rear and part of the underside, with four small blades and the twin exhaust tubes centred on the car.

The car's bodywork and the interior stitching is painted in a primary colour, while the details on the side skirts are painted in a secondary colour. A trim colour is also available for the interior, being applied to the dashboard, the horn cap, part of the doors and the seats. It uses ten-spoke rims with a circular detail on the centre, wrapped in low-profile tyres. The rims can also support a dedicated colour, although only naturally-generated examples from Content Creator or the one rewarded in the Lucky Wheel may have a black colour.

The Sugoi has a fair amount of wheelspin before it can take off, though while it does have a good amount of acceleration and top speed, it tends to fishtail uncontrollably when turning at fast speeds despite its FWD feature, unless brakes or a handbrake is applied. Its durability is average at best and is overall still relatively outmatched by other Sports cars with much better performance, especially in terms of tackling corners.

The Sugoi is powered by a V8 engine, as suggested by the cover, powering the front wheels through a 6-speed gearbox. Its engine sound is identical to the one from cars like the Bifta and the Kuruma. 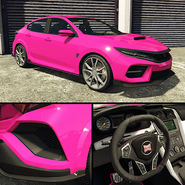 The Sugoi in the cinematic preview on GTA Online Rockstar Games Social Club.

Sugoi badge used in the adverts.

A customised Sugoi parked at a Los Santos car meet.

A blue Sugoi at the sunset. 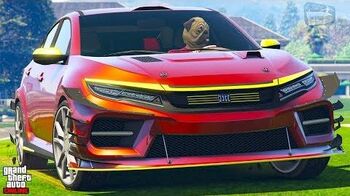 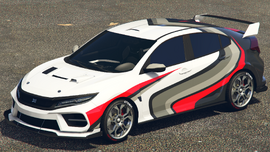 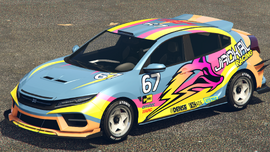