"I'm Sue Murry, and I approve this message."
―Sue Murry

Sue Murry is a character in Grand Theft Auto V.

Sue is a candidate for Governor of San Andreas. She is a divorced former school teacher with liberal political ideologies and "knows what Conservatives want". Her main opponent in the gubernatorial elections is Jock Cranley, a former Vinewood stuntman turned politician.

She has commercials on TV advertising her campaign, and a website at Suemurry.com. Sue's campaign video states that she will raise the taxes to 74% and make a major investment in public radio.

A promotional banner for Sue Murry from the GTA V website. 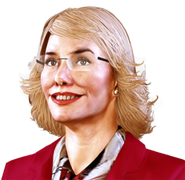 Retrieved from "https://gta.fandom.com/wiki/Sue_Murry?oldid=1188780"
Community content is available under CC-BY-SA unless otherwise noted.