The system is operated by the Liberty Transport Authority (LTA). The subway also appears in Grand Theft Auto: Chinatown Wars; it is inaccessible to the player, yet trains still run. About 65% of the network is underground, with the remaining 35% being overground. No platforms on the entire system are staggered and there are also no ground-level stations or tracks in the entire system, except for the depot. The subway system does not carry over into Alderney.

All stations in Broker, Dukes, and Bohan are located above ground; stations in Algonquin, aside from Frankfort High LTA, are underground, their entrances are distinguishable by their green iron fencing and attached globe lamps. All stations in the system are operational except one, referred to as Dukes Boulevard station (by an LTA Construction Sign on the Station entrance) along a short stub branch of the Broker Line in East Island City; the line is also connected to the Firefly Projects Rail Yard. The cost of using the subway is deducted after the trip (with fares increasing based on the length of the ride, unlike the NYC MTA's single base fare), as the ticket machines and turnstiles are not operable. Subway lines can be seen on the Radar in the HUD as semitransparent gray lines, with stations marked as square lozenges. If a station is underground, multiple access points will be available from street level, typically depicted in the form of a stairway leading underground surrounded by cast iron grills with lampposts attached in the corners. Some of the city's homeless can be found taking shelter in the large junction tunnel under Lancet. Sometimes, the homeless will "commit suicide" and wander on the tracks, only to be hit by an oncoming train. These incidents can also happen at stations if a homeless person is on the platform. Normally this happens at Emerald subway station.

The subway lines in Broker/Dukes and Bohan are available and may be used from the beginning of the game, however as long as Algonquin is locked, only partial use of the train is possible (the Bohan line allowing only a short hop between two stations, for example), even though the trains are still shown going towards Algonquin. Full access to the subway system is granted following the mission Blow Your Cover when Algonquin is unlocked.

The subway is a good way to escape from the police at any wanted levels. At lower levels, players may still use the train; as the AI is confused by the player entering the trains, the train may take you well outside the wanted zone. However, the use of the subway trains is impossible when the player has a three-star wanted level or more, as the trains will either stop at stations indefinitely, bypass any station the player is in, or are halted wherever they are. This deliberately occurs to prevent the player from either escaping the police or easily unlocking achievements and trophies such as "One Man Army".

Alternatively, the subway tunnels themselves may be effectively used by the player to escape on foot as police officers do not venture into the tunnels unless they spot the player earlier and pursue him into the tunnels. The player may receive a 1 star wanted level if he proceeds to enter the train without having money for travel.

Subway trains are not operational, or even available, on multiplayer. However, access to the tracks is still available and is a useful way to escape the police. Trains run on a "rail", i.e. they cannot move from their set route, and will not stop for any reason whatsoever unless coded to, even when their path is blocked (e.g. by a vehicle). The coded coordinates of the tracks can be altered with specific programs, by editing the path files.

Like their real life counterparts, the stations feature turnstiles and do not accept cash or coinage. Instead of MetroCards or tokens, the system uses paper tickets sold from ticket machines. The ticket machines resemble their real life counterpart Long Island Railroad vending machines. The turnstiles, meanwhile, strongly resemble the High Entrance Turnstiles of the MTA, but instead of a rotating arm they use a push bar more commonly found in libraries. The stations also have metal service entry gates (usually open), though only one station is wheelchair accessible. Token booths are absent, replaced by the ticket machines and an unusually large police presence.

While the real-life subway is powered by electricity, third rail power delivery is only present at the Francis International Airport station and in the Firefly Projects Rail Yard. This may imply that the trains are diesel, or it could just be an oversight by the developers. A sign at Francis International Airport station contains the warning "Avoid third rail track, or you'll get zapped", indicating that at least some trains run on electricity. However, stepping on the third rail won't electrify the player.

The underground stations feature tiled walls and platform pillars, similar to the style of the BMT and IRT divisions of the New York City Subway. Stations are identified with dark blue signs with white text of the station name. While the tunnels between stations have very low clearance, the stations have very high ceilings (with the mezzanines visible from platform level).

The entrance stairs bear a strong resemblance to their real-life counterparts, including the dark green metal design and distinctive globe entrance lamps.

The elevated lines are very similar to their real-life counterparts, except that they are noticeably wide. Each line has two tracks, but have a third middle trackway unoccupied, while the structures are wide enough to fit at least two additional tracks (for an express service). Most stations resemble typical elevated stations, except for Lynch Street (which is based on the Forest Hills Long Island Rail Road Station) and Francis International Airport (based on the stations of the JFK AirTrain).

The subway trains consist of either two or three heavily graffitied cars and have black and white internal CCTV cameras which the player automatically views while on the train. There will be three cars during the day, and two at night.

Like Grand Theft Auto III and Grand Theft Auto: San Andreas, it is impossible to destroy trains during gameplay. Trains are scripted to be decoupled in the mission For the Man Who Has Everything, derailed in No Way on the Subway, and destroyed in Bang Bang. There are no visible drivers on the trains, and trains cannot be commandeered by the player unless done so via game modifications. Like other games, trains will not stop for the player if they are on the tracks.

It is possible that there were actual train conductors controlling the trains in the early beta of the game, theoretically allowing them to be stolen and operated by the player and disproving the fact that trains would run in a scripted method.

In the game files, there is a model named M_M_TRAIN_01, which is accessible and controllable by certain trainers. The model even has variations for clothes and accessories (hats and glasses).

There are also recordings for the unused model. There are exactly 113 files. "Walkie Talkie" recorded files also exist. During one of these recordings, he says that he saw "a rat the size of a pitbull in the tunnels". The train conductor model also seems to have a slightly similar appearance to overweight LCPD officers.

The train conductors have been scrapped and the developers textured the train's cab windows with black tint, but remains can be found in the train models too; a seat and dashboard in the driver's cab.

The subway system has four main lines, in pairs:

These four lines serve all the boroughs of Liberty City, but do not serve the state of Alderney.

It is possible that the Liberty City Subway may have shared the tracks with (now defunct) freight trains in the past, as well as having a completely different route (possibly reserved for the freight trains).

In western East Island City, exists a section of railway that leads from a bricked up tunnel west toward Algonquin, and stops facing that water, suggesting a bridge (possibly a Hell Gate Bridge replica, since it heads towards to Charge Island and is part of the subway) or waterside ferry/train transfer terminal may have at one point existed.

There is an abandoned portion of an old railway in the west along Westminster and The Meat Quarter, running from the plaza of a new building (blocked off by construction barricades) through several buildings before splitting up. One section runs into a garage in a building (supporting the fact that it may have been used for freight), and the other leads to a broken-off edge forming a ramp. This stretch references the real-life High Line freight railway in New York City, which ran in the corresponding areas of Manhattan (Meatpacking District, Greenwich Village, Chelsea, and Hell's Kitchen) from the 30s to the 80s and in real life has become a park.

Several disused tracks and railcars also dot industrial areas in Alderney. These include two abandoned rail depots (one that has been almost completely torn down), several sections of track (mostly running through old alleyways), a section of track running by the old Sprunk Factory that splits up, with one side leading into a bricked up tunnel. There is also a rail line running from a bricked up tunnel running from southern Alderney City through Normandy and Port Tudor, finally ending on an incline with several old pillars present on the other end (suggesting a bridge or elevated line) near northern Acter Industrial Park. A section of this track also runs onto one of the piers in Port Tudor. This track is mostly intact, though several newer structures (roads, buildings) have been built over it.

There also are two unused subway tunnels in the Algonquin side of the network that form connections between two other lines, but are not part of regular subway routes: These include the tunnel which connects North Park Station to West Park Station and one which connects West Park Station to Frankfort High Station. Also, within the junction tunnel under Lancet, there are tracks that connect Easton Station to Manganese East Station. These tunnels would technically be used for alternative routes or for maintenance work, though there is no such in-game activity. 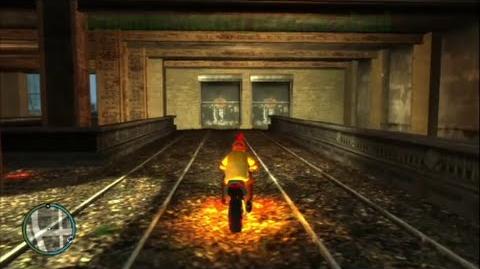 On every station and train, the intercom voice is a pleasant woman:

"This is the J train. The Next Stop is: Manganese West Station." Heard when the train is about to depart a station.

Although, if the player attracts a 3 star Wanted Level and the vehicle is stopped by the police, a man will say:

"This train terminates here, all change."

This is an example of an approach announcement, spoken by the woman:

"The Train is approaching Castle Gardens station." (This will sound about 7-8 seconds before the train actually reaches the station)

When a train is approaching a station, the following line is spoken by the woman:

"The train approaching is the 3 train, bound for Schottler Station."

When the train stops at the current station:

"This is Easton Station" 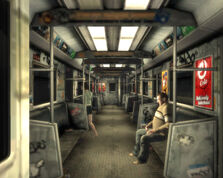 The interior of a LTA train in GTA IV, depicting its shabby appearance.

A typical surface entrance into a subway station in Algonquin, GTA IV. Certain entrances may be double in width, although all subway entrances and hallways are only wide enough to allow movement of pedestrians and motorbikes. 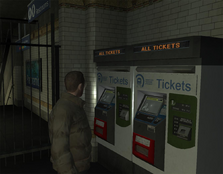 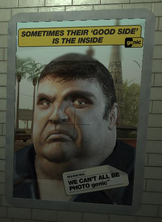 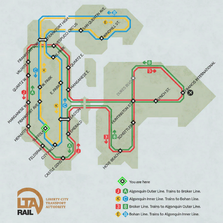 A subway train pulling in at Frankfort Low Station 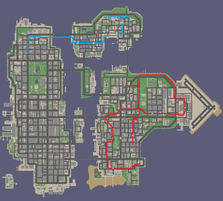 A map of Liberty City in GTA Chinatown Wars with the subway lines highlighted in red for Broker and Dukes, and blue for Bohan and Algonquin. The white dots represent stations.